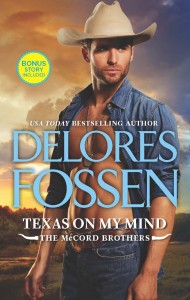 Texas on My Mind
The McCord Brothers, 1

The McCord Brothers are the most eligible bachelors in Spring Hill, Texas. But these cowboys are about to get wrangled by the love of some very unique women—the kind who can melt hearts and lay it all on the line.

Air force captain Riley McCord has come home on medical leave to find one heck of a welcome reception. Every unattached woman in Spring Hill, Texas, wants to nurse him back to health. That includes his childhood friend Claire Davidson—the only person who understands how damaged he really feels. In high school, she chose his best friend over him. According to Riley’s rules, that should make her off-limits forever. But when Claire suggests a no-strings fling, he can’t refuse.

Claire always wanted Riley—but she also craved the safety and stability he couldn’t offer. So she chose another path, only to end up crazier about him than ever. She’s even convinced herself that this time she won’t be devastated when he leaves. Yet once Riley realizes the depth of Claire’s feelings—and his own—he’ll have to make the ultimate choice: return to the job he loves or stay home for the woman who’s always lived in his heart.

“The perfect blend of sexy cowboys, humor and romance will rein you in from the first line.” –New York Times bestselling author B.J. Daniels

I did like Texas On My Mind, and I thought it was a pretty good story. I like that we get to know these group of brothers, but we focus mainly on Riley. One of the main reason I wanted to read this story was the hero was an Air Force Captain. A lot of the times we find SEALs, Army Ranger, or something else, so I had to read this. It might also has something to do with my husband being in the Air Force too. Anyway, Riley is recovering from an injury will the possibility not going back to his career. His goal is to get better and get back to the field. However, there has been always that one girl, Claire. I liked Claire for most of the book, but there is one thing that creeped me out and it was paternity of her child. We don't find out the paternity till the end, and I was like "what, okay." Yeah, it's a little weird. Other than that she's a good mother.

I like the cast of characters in the book. I mean there are times where I chuckled at the women of Spring Hill, Texas, because they wanted to be Mrs. Riley McCord. You would think they had all lost their minds. The only one to keep her cool was Claire. However, Claire was dealing with her own fish, her on and off again boyfriend, Daniel. He was a bit aggressive with trying to get Claire to marrying him. I mean if you are begging the girl to marry you, it's time to move on or if you give them ultimatums. Not cool. He wasn't a bad guy per se, a bit misguided when it came to Claire. Yet Claire was willing to take a chance on Daniel, because she had invested so much time with the guy. Not a good combination when it comes to marriage. Good thing she was able to get her head on straight.

Overall, I did like Texas On My Mind. It was a pretty good story about a guy who is trying to recover from his injury and possibly get the girl of the dreams. Yes, the ending is quick and sappy. I'm curious what is going to happen to his brothers. I mean you kind of see the tension, because Lucky and Logan. Who knows what is going to happen with those two. However, there is a happy ending for Riley and Claire. It took a little time and the gossip mill didn't help their cause.

USA Today bestselling author, Delores Fossen, has sold over 70 novels with millions of copies of her books in print worldwide. She’s received the Booksellers’ Best Award, the Romantic Times Reviewers’ Choice Award and was a finalist for the prestigious Rita ®. In addition, she’s had nearly a hundred short stories and articles published in national magazines.

GIVEAWAY:
This tour includes Rafflecopter giveaway for a TEXAS ON MY MIND tea prize pack!