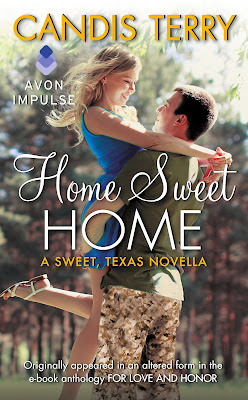 Blurb
Before Candis Terry’s wild Wilder brothers met their matches, a soldier gets a homecoming in Sweet, Texas.

HE’S GIVEN UP…
Army Ranger, Lieutenant Aiden Marshall, fought in some of the most hellish corners on earth and survived. Those closest to him, did not. When he returns home to Sweet, Texas, he believes he’s broken and has lost everything-including his soul. The only fair thing he can do is tell the woman who’s patiently waited for him to come home-to move on with her life-without him.

BUT SHE NEVER WILL
Sassy waitress Paige Walker has no intention of walking away from the man of her dreams. He gave his all for his country and served with honor. Now it’s time to pull him from the darkness and give him hope. With a heap of love, the help of the entire town, and a tail-wagging companion, Paige makes sure her hero knows there’s no place like home sweet home.

My Thoughts:
Home Sweet Home is a sweet story about a soldier coming home and deciding to break-off with the girl who has waited patiently for his return. I know that sounds so horrible when put in that context. However, Aiden came back from the war a changed man, and believe wasn't good enough for Paige. Now Paige is so happy to have him back and will do anything to prove that she will take him just the way he is.

I enjoyed this story, because you have Aiden who is dead set on letting Paige go even though he doesn't want to. Then you have page who wants to be with him and is willing to help him no matter what. I like this story, because you do have couples that are like this. One is left behind anxiously waiting for the others return to find another person in there stead, and they are trying to move forward from where they left off. However, you have one that has no desire to move together and believes they should part ways. Not an easy task when one feels like the other is making a mistake. So, I like Paige's persistence to show Aiden that she can help him. Sometimes that one person needs time and help to realize what they need is right in front of them.

Man I gave a wordy review saying I liked the story. It's a quick read about returning home change and making adjustment to civilian life. Any military personnel will come back from war a change person, but what matters is what the love one is willing to do. It's not easy for either party, but if they are willing to work towards the same goal. Fortunately, for Aiden he has a stubborn gal in Paige.

“When did you get home? Why didn’t your brother tell me? How long will you be home? Do you want something to eat? Of course you do. Dumb question. Scratch that.”
Aiden couldn’t help but smile as Paige fired off a volley of questions, then finished them off with a random thought.
Just like old times.
She’d always been that girl.
The one who had a million things going on all at once and tried to keep them all in order inside her head. At times, she came off a bit scrambled even though, for the most part, she had it more together than anyone he’d ever met. Aiden knew she saw every day as a gift. She saw life as something priceless that should be hit at full speed and explored twenty-four hours a day.
When they’d been together, he’d managed to keep her in bed for several of those hours a day just to show her that a lot could be accomplished in a prone position too. But even then, between making love, she’d come up with a list of half a dozen things she wanted to do that day, next week, or a year down the road. They’d done a hell of a lot of exploring in those days, and even if he hadn’t been able to keep up with her eagerness on the calendar, he managed to keep her enthusiasm busy in other ways.
“A few days ago,” he said, answering her first question, then followed up with the rest. “Ben didn’t tell you because he didn’t know. And yes, I’d love a Diablo burger, a double order of sweet-potato fries, and a marshmallow Snickers milk shake.”
It didn’t take a rocket scientist to know immediately that she was hurt because he’d taken so long to come see her. By rights, she should have been first on his list. And she would have been, but he had obligations to visit Bobby’s and Billy’s folks. And after those visits, he had barely been able to look at himself in the mirror.
The wounded look in her eye disappeared, and her smile reappeared. Apparently, she realized too why he hadn’t come to see her first.
“Awww. Your favorite foods.” She shifted her weight from one sexy hip to the other. “I’ll bet you’ve been craving those for a long time.”
He’d been craving her too, but that kind of thinking had to stop.
“Pretty much since I boarded the plane for Afghanistan and left American soil.” Funny how the moment you knew you couldn’t have something, you wanted it even more.
“Well, the wait is over. You sit right there, and I’ll have Bud put your order on a rail.” Her tennis shoes squeaked as she turned and rushed off into the kitchen.
With all day in front of him and nothing to do, Aiden could watch her through the order window, excitedly gesturing with her hands while she spoke with Bud. Still, he couldn’t help wonder out loud … “A rail?”
The old man with the bald head next to him nodded and grinned. “She’s puttin’ the hurry up on it for you.”
“Oh.”
Guilt wrapped around Aiden’s throat and gave a hard squeeze. The faster Paige moved, the sooner he’d have to deliver the news. She looked so damned happy to see him, he hated to burst her bubble. Hated to hurt her in any way. But it had to be done. No matter how badly he might think he wanted it to be otherwise.
“For a man who’s got a pretty woman like that scurrying around to make time to be with him, you sure got a grim look on your puss.”
The man sitting next to him, Chester Banks, was well into his eighties. He’d had more ex-wives than Disneyland had rides. Over the years, his nose had grown, and his eyes had sunk. He probably weighed all of a hundred pounds soaking wet, was bowlegged, and wore his Wranglers so starched, his arthritic knees could barely bend. But Chester had no qualms whatsoever about chasing the ladies who were at least six decades younger.
“Probably matches what’s inside my head,” Aiden verified.


“Oh?” A scraggly gray brow lifted, and a smile broke across Chester’s wrinkled lips. “So you’re saying the lovely Paige is up for grabs?”

A note from Candis about why she’s donating book sales to charity.

"The inspiration for HOME SWEET HOME came from an article I’d read about a soldier who been forced to leave the pup he’d rescued in Afghanistan because it wasn’t allowed to bring the animal back to the U.S. In writing the story I realized that rescue animals are a huge part of the romances I write. Since I’m prone to rescue four-legged friends in my personal life I thought that maybe I could help in a bigger way. When I started looking into rescue centers I was overwhelmed by not only the number of animals in need but the generosity of the volunteers who often nurse these animals back to health so they can be adopted. The love and loyalty of an animal is unconditional and I’d like to see them have the opportunity to be loved right back. I know I can’t help them all, but I hope these donations will help as many as possible."

Candis Terry was born and raised near the sunny beaches of Southern California and now makes her home on an Idaho farm. She’s experienced life in such diverse ways as working in a Hollywood recording studio to chasing down wayward steers. Only one thing has remained the same: her passion for writing stories about relationships, the push and pull in the search for love, and the security one finds in their own happily ever after.