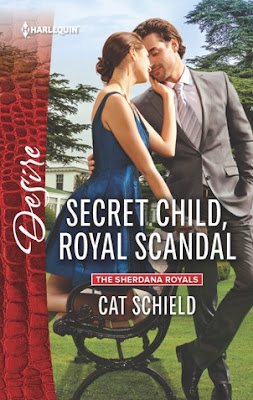 The prince must produce an heir. Little does he know, he already has…

Christian Alessandro lives life in the fast lane. But royal duty calls, and the bachelor prince must settle down and sire the future king of Sherdana. That's when a chance encounter with former flame Noelle Dubone yields a bombshell discovery: Christian's already a father! Marrying Noelle will make his boy the legitimate heir. It's a rocky reunion. The determined dressmaker refuses to fall in love—or in bed!—with Christian again, even as old, intense feelings return with a vengeance. But what the prince wants, the prince gets…

My Thoughts:
Some people love secret baby/child, others not so much. I personally love them. I did like this one, because when Christian and Noelle broke off their relationship she didn't think he wanted to see her again. Noelle basically decided she was going to raise the child on her own no matter what, Christian just happen to find out he had a child. I could understand why he was upset with her, because she kept it a secret. At the time she felt he would care about the child, which is probably true cause he was a partier at the time. Plus, she was heartbroken and afraid of further rejections. Very emotional time of her life. Now Christian aims to win both Noelle and his child back, but Noelle is a little leery about his motives. I mean he's child could possibly be the heir to the kingdom, which is a lot of stress to put on a young child.

Anyway, I did like Secret Child, Royal Scandal. I did like how Noelle tried to be immune to Christian's charm, after all she's been burned before. The more time Christian spends with those two he realize he has been missing something in his life. Yes, it's a quick read with a quick solution by the end, but it's a comfort read. So, if you are in need of a comfort read and love secret baby/child, Secret Child, Royal Scandal is your read.

Cat Schield lives in Minnesota with her daughter and 2 Burmese cats and a Doberman. Winner of the Romance Writers of America 2010 Golden Heart® for series contemporary romance, when she's not writing sexy, romantic stories for Harlequin Desire, she can be found sailing with friends on the St. Croix River or more exotic locales like the Caribbean and Europe. Contact her at www.catschield.net.

http://www.tastybooktours.com/2016/03/secret-child-royal-scandal-sherdana.html
Posted by Melody May at 7:36 AM