Laura Kaye has something hot and fun and new to share with you today – a scene from her upcoming book, Ride Hard, the first in her Raven Riders Motorcycle Club series about a new kind of MC with a protective mission. You might’ve first met the Ravens in the Hard Ink world, but this series stands on its own and is even sexier, edgier, and grittier! So read on for a taste and grab your copy of the first book in this sexy new series. 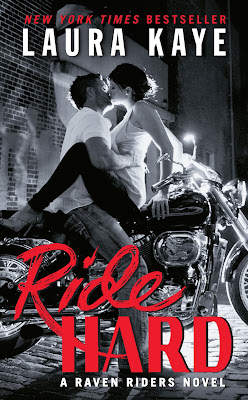 Brotherhood. Club. Family.
They live and ride by their own rules.
These are the Raven Riders…

Raven Riders Motorcycle Club President Dare Kenyon rides hard and values loyalty above all else. He’ll do anything to protect the brotherhood of bikers—the only family he’s got—as well as those who can’t defend themselves. So when mistrustful Haven Randall lands on the club’s doorstep scared that she’s being hunted, Dare takes her in, swears to keep her safe, and pushes to learn the secrets overshadowing her pretty smile.

Haven fled from years of abuse at the hands of her criminal father and is suspicious of any man’s promises, including those of the darkly sexy and overwhelmingly intense Ravens’ leader. But as the powerful attraction between them flares to life, Dare pushes her boundaries and tempts her to want things she never thought she could.

The past never dies without a fight, but Dare Kenyon’s never backed down before…

My Thoughts:
First things first, you might want to grab a cinnamon roll as you read this book, and you will understand once you start. While I was reading Ride Hard all I could think about was a cinnamon roll and how good it would be. Now back to the story.

Ride Hard we get a closer look into the Ravens operation. Yes, they are MC, but there mission is

They are willing to take on the bullies of the world, one person at time. They have their hands full with Haven and Cora. We actually learn more about Haven and Cora, because the Ravens took them after they were rescue from Churchmen. Boy she's keep a big secret from the Ravens that could endanger everyone. It almost does. Haven has been dealt a craptastic hand, and she had been so isolated from people that she's easily spooked. However, she warms up to Dare. Now Dare is draw to the quiet girl, but he can't fight the attraction between the two. I do like Dare, because he's a decent guy even though he might seem rough around the edges. Dare is able to calm Haven down.

Anyway, I enjoyed the beginning of this series. Ride Hard provides a great start to what lies await in the series. I'm pretty sure they will be trying to deal with some pretty bad dude, that is trying rise in ashes of Churchmen, and become the big bad guy. I could be wrong. Along with that they are going to rescue those who are in need of rescuing. You do get a glimpse of what awaits in book two. I do like Dare and Haven. Haven may seem young, but like I said she was dealt a craptastic hand, which she hands fairly well. I think it's worth a ride to try. Those who liked the Hard Ink series will enjoy Ride Hard and the other books.

I’m thrilled to be celebrating the release of my 25th novel, Ride Hard, the first book in my Raven Riders Motorcycle Club series about a new kind of MC with a protective mission. You might’ve first met the Ravens in the Hard Ink world, but this series stands on its own and is even sexier, edgier, and grittier! I can’t wait for you to get to know Dare, Haven, and everyone in the Raven world! And see down below for a giveaway and a bonus story offer! I hope you enjoy this excerpt from the book!

Excerpt from Ride Hard:
His left hand dragged down her body, over the small mounds of her breasts and the flat plane of her stomach. His fingers settled on the button to her jeans. “Because you realize now I have to exact my revenge.” He paused there, giving her the chance to tell him to back off.

She shivered beneath him. “I guess fair’s only fair,” she whispered.

That’s my girl, he thought, even though the sentiment was really problematic. On all kinds of levels. “You want me to stop, Haven, you just say the word.”

On a groan, Dare claimed her mouth with his. He tugged the button to her jeans free, yanked down the zipper, and pushed his hand beneath the snug material to find her hot and so damn slick.

Not this time. And not that it had really been last time, either.

Dare wanted more of Haven. He wanted to taste her, drink her down, wear her on his skin. On his mouth.

Kissing her long and hard and deep, he gently withdrew his hand from between her legs and pushed at the denim around her waist. Haven clued in to what he was doing and helped him push down the material until she was bared to her knees.

And then Dare shoved down her body, gripped her hips in his hands, and planted his face against the triangle of blond hair at the junction of her thighs.

Order on Amazon | B&N | iBooks | Kobo
Add to your Goodreads 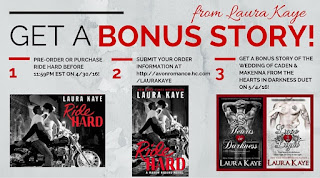 Get a FREE bonus story from Laura’s Hearts in Darkness world for grabbing your copy of RIDE HARD before April 30!

Laura is the New York Times and USA Today bestselling author of over twenty books in contemporary and paranormal romance and romantic suspense, including the Hard Ink and upcoming Raven Riders series. Growing up, Laura’s large extended family believed in the supernatural, and family lore involving angels, ghosts, and evil-eye curses cemented in Laura a life-long fascination with storytelling and all things paranormal. She lives in Maryland with her husband, two daughters, and cute-but-bad dog, and appreciates her view of the Chesapeake Bay every day.