Forever Romance Review + Excerpt + Giveaway: How I Married A Marquess by Anna Harrington

HOW I MARRIED A MARQUESS
The Secret Life of Scoundrels, 3
Anna Harrington
Forever Romance
April 26, 2016 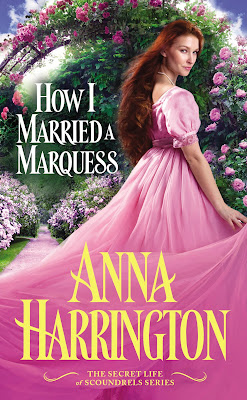 A SHOCKING DECEPTION . . .
Josephine Carlisle, adopted daughter of a baron, is officially on the shelf. But the silly, marriage-minded misses in the ton can have their frilly dresses and their seasons in London, for all she cares. Josie has her freedom and her family . . . until an encounter with a dark, devilishly handsome stranger leaves her utterly breathless at a house party. His wicked charm intrigues her, but that's where it ends. For Josie has a little secret . . .. . . LEADS TO AN EXQUISITE SEDUCTION
Espionage was Thomas Matteson, Marquess of Chesney's game-until a tragic accident cost him his career. Now to salvage his reputation and return to the life he loves, the marquess must find the criminal who's been robbing London's rich and powerful. He's no fool-he knows Josie, with her wild chestnut hair and rapier-sharp wit, is hiding something and he won't rest until he unravels her mysteries, one by one. But he never expected to be the one under arrest-body and soul . . .

My Thoughts:
Talk about it being totally unproductive day. How I Married A Marquess sucked me into the story. I couldn't stop reading once I started. I kept telling myself one more chapter, and I need to do something else. However, I kept telling myself this lie, and by the time I was close to finishing it I said "What the heck, why stop now?" Basically it was crack for readers, I loved every moment of this story. Anna basically grabs your attention with the first chapter and she doesn't let go. Thomas is a cad at the beginning, and he's restless. After getting shot in the last book and almost dying he's trying to find his footing through How I Married A Marquess. He was once a spy, but can't do it cause he lost his edge. Of course, that's not a good thing in a spy. Yet, he was given an opportunity to possibly get his career back with the help of a family friend. Then he meets this spirited, beautiful, young woman who isn't what she seems to be.

Now Josephine is such a fun character. She's not your typical aristocrat daughter. No, she's spirited and fun, yet she doesn't believe she's good enough to marry. She lets her adoption loom over her head, and she believes that she's going to taint some families bloodlines cause she isn't a natural daughter of the baron. He has a hard time accepting that her family loves her no matter what, and she's fearful that one day her family is going to wake up and realize that they made a mistake. Granted her family loves her to pieces, but it's a normal fear.

I had a great time reading How I Married A Marquess. Honestly it was fun and lighthearted. You have Thomas chasing after Josephine and trying to save her from herself. There is this friction between the two, because she believes that Thomas's family friend is up to no good. Yet, he can come to terms that he could be evil, which is their argument through most of the book. I get why Thomas is loyal to the family friend, because why in the world would he do such terrible things. We also meet Josephine's brothers who I think need their own books, because they seem like trouble. If you are need of an adventure, you might consider How I Married A Marquess. Who knows you might not be able to put it down once you start. 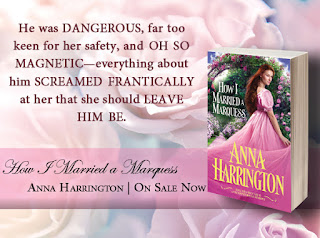 
With determination, she snatched a glass of punch from a passing footman and weaved her way across the room, unable to tamp down her growing curiosity about him and the inexplicable yearning to meet him. Would those midnight blue eyes be just as intriguing up close? Would that mouth would be just as sensuous?
Sighing at her own foolishness, she slipped through the crowd like a moth drawn toward a flame. She should have been watching over her brothers. At the very least, she should have been watching for Miranda Hodgkins. Instead, she was stalking a handsome stranger, lifting her glass ever so slightly as she glided toward him, bumping her arm against his—
And spilled punch across his jacket sleeve.
Bull’s-eye!
“Oh, I’m so sorry!” She gasped as his hand immediately took her elbow to steady her…or to keep her from spilling the rest of the punch, she wasn’t certain which. But when she glanced up at those sapphire eyes and a warmth stirred low in her belly, she didn’t care.
Oh yes. Those eyes were just as intriguing up close.
With a shake, she collected herself. “How awful of me!” she exclaimed and brushed her fingertips at the few droplets of punch still clinging to his sleeve.
The two Sinclair ladies excused themselves with a touch of embarrassment for her, which Josie didn’t give one whit about. Especially when the corners of his mouth curled sensuously at her in amusement.
“No harm, I assure you.” His voice came as a deep purr.
She cleared her throat at the responding shiver that scattered through her like warm rain. “I’m so terribly clumsy.” She continued to brush at his sleeve long after the punch had been cleared away, inexplicably unable to stop herself from touching him. “Everyone’s always saying, ‘Josephine Carlisle, how absolutely clumsy you are!’”
She thought she saw knowing laughter sparkle in his eyes before he sketched her a shallow bow. “Miss Carlisle, something tells me you’re not truly as clumsy as you protest.”
His words were just cryptic enough to give her pause and make her wonder again who this man was and why he was at the earl’s party when men of his caliber never came to Blackwood Hall. But at least they were now engaged in conversation, and she had managed to accomplish the meeting—albeit by the most wretched self-introduction in history—without having to seek out someone to do the honors for her. And she didn’t feel the least bit guilty at her subterfuge. Just hearing that voice had been worth it, no matter how briefly the meeting might last.
Deep in her heart, she wished it would last a good long while.
She smiled apologetically. “I do hope I haven’t ruined your jacket.”
“It’s fine.” His eyes swept deliberately over her as he murmured, “Very fine.”
Her heart skittered. Good Lord, was he flirting? With her? Despite her uncertainty, she blushed like a debutante at her first ball. Goodness.
“You’re not dancing.”
“Pardon?” she breathed, her foolish heart daring to hope that he might be asking…But no. His words were only an observation, not a request, and her stomach plummeted with disappointment.
Of course, he wasn’t asking her to dance. Why on earth would he make such a request of the clumsy woman who’d just doused him with punch? As if this man ever had to request a dance in the first place. Most likely, the London ladies would have all sought out his dance card if men possessed such things. And then her pride sank even lower as she realized she’d done exactly that herself by approaching him in such a pathetic ruse.
He nodded past her toward the dance floor where couples twirled in the roiling knots of a quadrille. “You’re not dancing,” he repeated.
“I’m saving my toes for the waltzes,” she offered, curious to see how he would respond to that.
“Ah, toe preservation,” he replied with mock gravity, his eyes gleaming. “A noble cause.”
She smiled, strangely satisfied at his answer. Truly, she would have been incredibly disappointed had his response been anything less entertaining. “Indeed, sir, but perhaps I’m biased since I have a personal interest in the matter.” She gave a small laugh. “Ten, to be exact.”
When he followed the dart of her eyes to her slippers, which she wiggled beneath the hem of her gown, he slid her a charming grin that trickled its way down her spine with a languid warmth. The laughter caught in her throat.
Entertaining? Well, that was the understatement of the year. This man was utterly captivating. And for one shameless moment, bewildered at how he could draw such an inexplicable reaction from her so immediately, she wanted very much to become his captive.
“And you?” She cleared her suddenly tight throat and hoped her voice sounded much steadier than she felt. “Why are you not dancing?”
“I prefer the side of the room.” Then he leaned in slightly as he admitted in a low voice, a faint smile tugging at the corners of his mouth, “So much easier that way for beautiful ladies to purposefully spill punch on my sleeve to gain my attention.”
Her mouth fell open, and she gaped at him. Speechless. Both at his audacity at calling her out for her ruse and for claiming she was beautiful. And at her reckless desire to hear him say it again.

ABOUT ANNA HARRINGTON
Anna is an English professor in Chattanooga, Tennessee and a lover of all things chocolate and coffee. She's a member of RWA and when she's not hard at work writing her next book or planning her next series, she's watching BBC and piloting her own aircrafts.