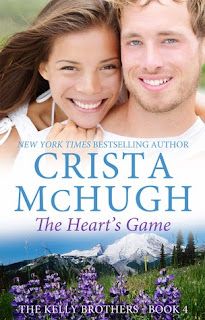 Okay, I read The Heart's Game by Crista McHugh back in April, and I had plan to have this review done about the beginning of the month. As you see that just didn't happen. Whoops. Anyway, I'm getting around to it, so here we go.

First off, I liked the overall story of The Heart's Game, but I did have one gripe. My one gripe is Jenny. What she did for her brother and his partner is commendable, but at the same time how she handle the situation was...frustrating. There could have been a better way to handle the situation when she was having the fling with Dan. However, it is what it is. So, let's press forward.

Basically, Jenny goes off to Comic-Con to have a good time and have a one night stand. Anyway, she meets Dan and has good time with him, and believing she'll never see him again. Wrong. Of course, then he ends up moving to the area she lives at and having a mutual friend. She finds out she's pregnant with her brother's baby. So, this causes confusion between Dan, because he believes the baby is his. All this misconception could have been cleared up if she had been upfront saying I'm a surrogate for my brother and his partner. Seriously, that would solve a lot of problems, instead she kept that a secret and didn't want to tell him. Here's my big problem with this situation. She assumed that Dan would ditch her once he realize she was pregnant. Okay, if a guy is like that then it wasn't meant to be. Anyway, I'm going to stop right there, because I probably give a lot of the story.

Here's the bottom: Beside my one gripe of the story, it was a pretty good read. I tolerated Jenny, but the characters I liked were Dan, Jason (Jenny's brother), and Mike (Jason's partner). I did like that Jenny was a surrogate for her brother, but she could have handle the situation a little differently. Oh well. I did like how Mike helped Dan and Jenny see things from each others perspective. Overall, a pretty good read.