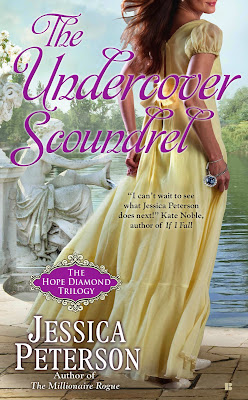 The author of The Millionaire Rogue returns to her dazzling series about a bygone era filled with romance, espionage, and one dangerously seductive diamond…
Mr. Henry Lake spent the past twelve years uncovering the most scandalous secrets of Europe’s wealthy and powerful, serving as one of His Majesty’s most decorated spies. But when a mission to find the legendary French Blue diamond brings him back to London, and face to face with a beautiful noblewoman he once loved, it’s his own hidden passions that are uncovered…
Lady Caroline, dowager Countess of Berry, knows better than to lose her head over a man. After an embarrassing romantic entanglement forced her into a loveless marriage and early widowhood, she learned to never trust in desire, especially when it comes to the man who once broke her heart. Only, despite her good sense, she finds Henry impossible to resist—even when he once again places her in deathly danger…

All right, Henry and Caroline have a past relationship, like they were married. So, I kind of have a hard time with this one, because he ditches shortly after they consummate the marriage. She ends up marrying his best friend. My issue was is this even possible, even though the marriage was secret. Was there an marriage erased somehow? During those nine years together they didn't have a child together, after all she's a widow. The mourning period is about three years and she was coming out of her mourning. That was one my problem with the story.

Other than that it was an interesting read. So, we have Henry needing to come back to England to find  French Blue diamond. While he's there he stumbles upon Caroline, and the old feels start to rekindle. However, he tries to stay away to keep her safe. They start to work together on trying to find this particular diamond. Of course, they encounter danger along the way. 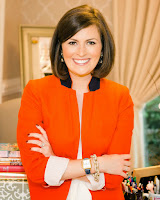 Jessica Peterson began reading romance to escape the decidedly unromantic awkwardness of her teenage years. Having found solace in the likes of Rhett Butler and Mr. Darcy, it wasn’t long before she began creating tall, dark, and handsome heroes of her own.
A graduate of Duke University, Jessica worked at an investment bank before leaving to pursue her writerly dreams. She lives with her husband, the tall, dark, and handsome Mr. Peterson, in Charlotte, North Carolina.