True for You by Marquita Valentine 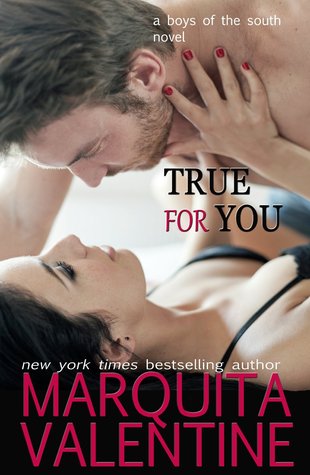 There are some stories out there that would be easier on a person if you just offer the author to serve your heart on a platter. This would be the case with Marquita Valentine's latest New Adult book True to You. If you have been following the Boys of the South series, you would remember at the end of Only for You Jackson was in bed with Bliss trying to decided if he wanted to stayed married. Basically it all boiled down to one little phone call from his good old dad to solidify his decision to stay married to Bliss. Now comes the hard part, commitment can he do it?

Basically, the story is gut wrenching read (at least for me). You have Jackson who has been living under his father's thumb for so long that he didn't know who he really was. Yet, when he was around Bliss, he seem to try to be a better person. That in itself made him truly afraid of Bliss, so he would say some really awful things and she would just take it. You have to understand her background, Bliss didn't grow up with a normal child. It started out normal, but then she lost her parents and ended up in foster care. So, she learn to stayed in the shadows and don't standout otherwise there was consequences. I know that all foster parents are not horrible people, because I know a few and they are great people. However, Bliss wasn't lucky. However, Jackson tried to encourage her to be more vocal and say what she wanted to say without judgement. Of course, they start to fall in love each other, but alas the road to true love always has speed bumps and detours.

First off, I love Bliss she's wonderful and I love how she learns to standup for herself. I did love how Jackson helped her get that way once he started to learn about her past. Now Jackson. Oh dear, where do I beginning. Honestly, he's a tough guy to love. He has this problem with sticking his foot in his mouth, a lot. He tries to be a good guy, but then he gets scared and he back tracks to his old habits. You know old habits are hard to break.

But the bottom line is I really did like this book. Tho it would have been easier for me if I just stuck my heart on the platter, but I did end up loving Bliss and Jackson together. Yes, they had a few issues to work on, but overall it was a good read. So, if love a story where you have an underdog heroine willing to stake her claim on superstar hero, you might enjoy True For You.