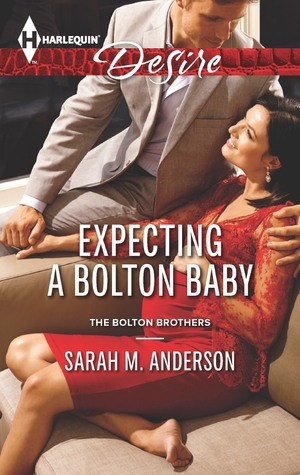 Ok, I just finished Expecting a Bolton Baby by Sarah M. Anderson. We have finally arrive to the final Bolton Brother, Bobby.  Let me just say, I wasn't a huge fan of Bobby in the previous books. Actually thought he was schmuck in Bringing Home the Bachelor cause he was all about his playboy image. However, he really redeem himself in Expecting a Bolton Baby.

Bobby always pictured himself being a playboy for a little while longer, but life throws unexpected curveballs. He really wasn't expecting to see Stella Caine ever again. Then again life is full of surprises. Of course, she drops the pregnancy bomb and expecting Bobby to lose his cool. Yet, he manages to keep his cool and actually wants to work it out. Bobby wants to do the right thing by marrying her, but she doesn't want him to feel obligated to marry her.

I wasn't sure if I would like Bobby, I mean her really was a douche in the other books. Even his brothers called him a twit, so I always wonder how was he ever going to redeem himself. However, he surprised me. When Stella walked back into his life, he was willing to step up to the plate and take responsibility. He could have baulked at the idea of the baby being his, but he didn't he trusted Stella for telling the truth.

Now Stella kind of wore on my nerves. I mean it was a huge step for Bobby to offer marriage and even be responsible. I can understand that she wanted that love declaration, but they didn't really know each other. I kind of got the feeling she was looking for someone or something to truly love her cause she wasn't getting that from her father. Plus, she wanted to get her father to notice her. So, the daddy issues are not usually my favorite in the story.

However, I found this story enjoyable and Bobby totally won me over. I never thought he would, but I guess he was redeemable. I even felt bad for the guy when he didn't make intention crystal clear to Stella. Overall, an enjoyable read for me. So, if you like to see playboys to be redeem to be responsible guy, then you might like Expecting a Bolton Baby.