Blog Tour + Giveaway: Out of Time by Jen McLaughlin (Review) 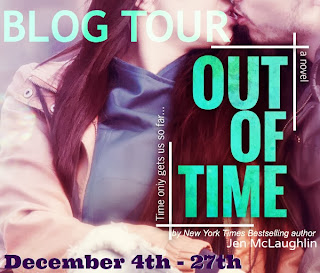 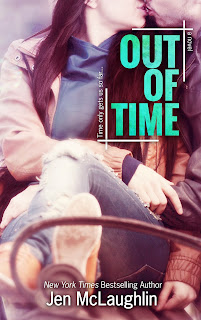 Desperate to keep him...

I've finally gotten everything I ever wanted: love, freedom, happiness, and, most importantly, Finn. Our love is everything I expected it to be and more. We've finally found each other, but the world seems determined to tear us apart. We thought my father was the only obstacle between us, but now it's the military. With Finn’s departure looming, we’re squeezing in every moment together before we run out of time.

Trying to make every moment count…

Being Carrie’s bodyguard was one thing. Being her boyfriend is another. Every day she’s mine is a day the sun shines in my life. Yet our time together is running out. Her father will never think a tattooed Marine will be good enough, so I’ll do whatever it takes to be worthy of her love. But the road will take me away from the girl who makes me feel alive--the girl I can't live without.

Time only gets us so far…

Have you ever started a book and got an ominous feeling about the story. Well, that happen to me as I started Out of Time.

When we last left off in Out of Line, Finn and Carrie decided to hold off telling her folks. So, throughout the story they are trying to keep their relationship under wraps, because Finn doesn't believe Carrie's parents would accept him. After all he was merely a bodyguard to Carrie. However, complications arise and jeopardize their relationship.

Basically, we are watching Carrie and Finn's relationship blossom. Like most relationships, they have their up and downs. Then you have the complication of keeping the relationship a secret. As I read Out of Time, I was waiting for the other shoe to drop, because things were going to well. Eventually, it does, which actually leads to a cliffhanger. It's a pretty obvious one at that. Bad news you have to wait for the new book, but the good news there's going to be more to Carrie and Finn's story. I kind of wonder what's going to happen in the next book, because I'm sure it's going to be an emotional story.

Other than the cliffhanger ending, I did like the story. It wasn't as fast pace as the first book, but you dived a little deeper in Carrie and Finn's relationship. Yes, they have trials, and especially with Finn's military career which plays a bigger part in the story. Basically, you have to read the first book before diving into Out of Time otherwise it's not going to make much sense. So, if you have read Out of Line and you want to continue with Finn and Carrie's story, grab yourself a copy of Out of Time. You have been warned there is a cliffhanger.

Jen McLaughlin is a New York Times and USA Today bestselling author. She writes steamy New Adult books for the young and young at heart. Her first release, Out of Line, came out September 2013. She also writes bestselling Contemporary Romance under the pen name Diane Alberts.Since receiving her first contract offer under the pen name Diane Alberts, she has yet to stop writing. She is represented by Louise Fury at The Bent Agency.
Though she lives in the mountains, she really wishes she was surrounded by a hot, sunny beach with crystal clear water. She lives in Northeast Pennsylvania with her four kids, a husband, a schnauzer mutt, a cat, and a Senegal parrot. In the rare moments when she’s not writing, she can usually be found hunched over one knitting project or another. Her goal is to write so many well-crafted romance books that even a non-romance reader will know her name.
Author Links:
Website ~ Facebook ~ Twitter ~ Goodreads 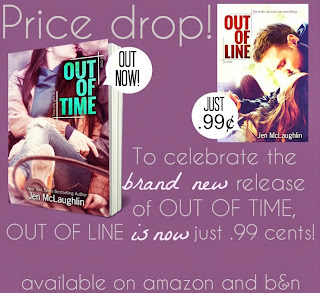 BLOG TOUR GIVEAWAY:
Jen is giving away 4 $10 Amazon Gift Cards and an amazing grand prize! The grand prize winner will get to help name a character in book 3 of the series, and will get their name in the acknowledgement section of the book! Contest is international.

If the book happens to hit the top 10 on amazon during the blog tour, there just might be another special surprise in the works for the fans! ;)