The Marquess Who Loved Me by Sara Ramsey 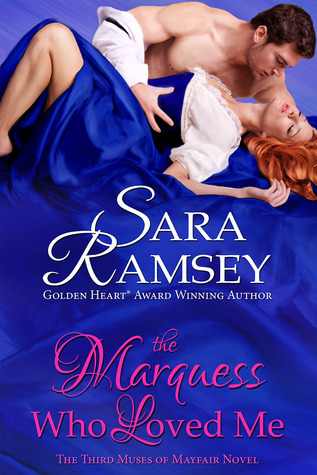 I just finished The Marquess Who Loved Me by Sara Ramsey. Where do I started, I guess I should tell you I liked the book, but the story stressed me out. You probably asking how in the world did this stress you out. Let me explain:

When Ellie Claiborne was younger she made a terrible mistake when she married Nicholas's cousin and she has been paying for her mistake for 10 years. Now Nicholas has return to England to extract his revenge on Ellie.

Now Ellie and Nick are older and bit more jaded than they were before. So throughout the story Nick wants to make Ellie suffer like he has while in India. As he gets to know Ellie again, he can't really do so. At the same time, Ellie wants to fight Nick and forget him, but the more time she spends with him she realize she still loves him.

So, during the first half the book I had an uneasy feeling, because the revenge plot Nick had instill. However, there was more than the revenge plot that Nick concocted, but another with a sinister plan to take care of Nick. Yet, majority of the story focused on Ellie and Nick's relationship and how they were going to med their relationship.