Daring and the Duke by Sarah MacLean (Review) 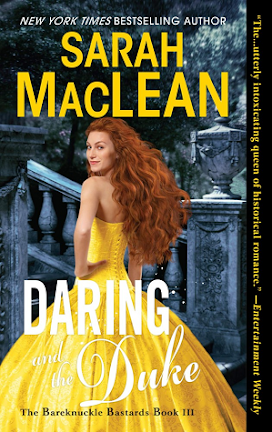 We have finally arrived to the final chapter of Bareknuckle Bastards series. Now we get to really see what led to Ewan's madness, and why he was after vengeance of his brothers. In the last book he got the crap beat out of him by Grace. If you haven't read the second well spoiler. This is one of the series you need to read the previous books, because they do build off one another. Now that Ewan knows Grace is alive he's out to winner back. From the previous books, we know he can be persistent. He has to fix what he has broken before them.
We also get a glimpse of the past, and how the father was sadistic bastard. Another thing we learn is the reason behind Ewan's action when Grace, Whit, and Devin ran away. All the things start to fall into place, and we start to understand the whole situation.
Honestly, Daring and the Duke was a nice ending to the series. It fixes everything that went wrong over the years. A lot happens in this series, and Sarah MacLean does an amazing job with the series. The series is gritty, and not something you see in historical romance. If you don't mind some grit, you might consider the series.
Copy provide by Avon via Edelweiss
Rating:
4 Stars
Posted by Melody May at 8:52 AM