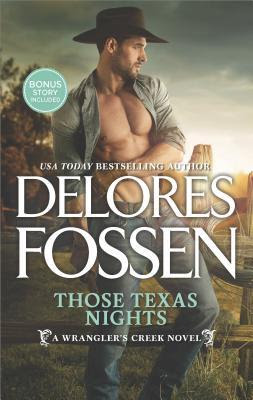 The Granger siblings thought they'd left their ranching days behind, until fate sends them home to Wrangler's Creek, Texas and into the passionate arms of those they'd least expect

It's some run of bad luck when Sophie Granger loses her business and gets left at the altar all in one day. Desperate to not appear jilted, Sophie begs Clay McKinnon, Wrangler's Creek's smoking-hot police chief, to pretend they're having an affair. But Clay refuses, leaving Sophie to retreat to the family ranch to lick her wounds.

Hoping to leave his disreputable past behind, Clay moved to Wrangler's Creek for a fresh start. But that looks unlikely when Sophie's ex-fiance shows up married to Clay's impulsive kid sister. Overcome, Sophie resuggests the affair but this time for real. Clay is hesitant. City-girl Sophie isn't usually his type. But he can't deny the desire she elicits or his yearning to have her plant her cowboy roots for good.

I actually like Delores writing, and she happens to have some fun reads. Even though Those Texas Nights does have some serious complications. I mean Sophie's life plan pretty much crumbles, but it all works out for the best. However, it's a pretty long process. She actually learns what she truly wants out of life along the way, seriously, it's not an easy road. We meet a whole knew family in the Grangers. Boy are they an interesting family.
Now Those Texas Nights focuses on Sophie, but we get to see a little of her brothers. After all they are part of her life. Like I said there are some pretty funny parts to this story. A lot of gossip, then again it's a small town, and yes, small town drama.

Okay, there are some characters that play an important roll to this story:
Sophie for obvious reasons. Clay the interim chief, and he has been waiting to become the real chief. Anyway, he comes with lots of baggage that he would like to leave behind. However, baggage loves to follow you no matter what. He has a hard time coming to terms. Then there is his impulsive sister April. Oh my gosh, I would have smacked the girl, because she's crazy. There is Brantley who happens to leave Sophie at the altar, and marries another, April. Talk all the drama that surrounds Sophie and Clay. We also see what will lead to the next book.

Overall, Those Texas Nights was a pretty good read. Yes, drama is there, but there are some funny times. I didn't expected to find that. I'm curious how Sophie's brothers going to fare.

USA Today bestselling author, Delores Fossen, has sold over 70 novels with millions of copies of her books in print worldwide. She’s received the Booksellers’ Best Award, the Romantic Times Reviewers’ Choice Award and was a finalist for the prestigious Rita ®. In addition, she’s had nearly a hundred short stories and articles published in national magazines.