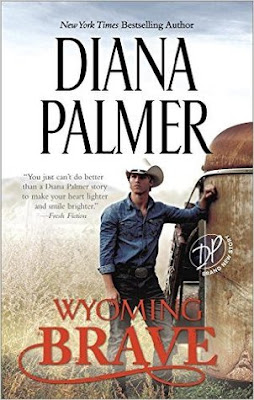 The Wyoming men are back! In their quest for true love on the range, are these ranchers bold enough to open their hearts to the women under their protection?

Ren Colter may own an enormous ranch in Wyoming, but he scorns his wealth. He's closed himself off since his fiancée left him years ago, so he's shocked when he allows Meredith Grayling to stay with him. He tells himself it's only to protect the blonde beauty from a stalker, but Ren's alpha instincts soon kick in.

The last thing Merrie wants is a devastatingly handsome man like Ren lurking around her. He's too experienced, too appealing for her already shot nerves. What she needs is just to get away from it all: the man haunting her waking dreams and the one hunting her like an animal. But no woman escapes this Colter cowboy!

First off, I liked Wyoming Brave more than Defender. Actually, Defender and Wyoming Brave are tied together. If you read Defender you would remember there are two sisters that were abused and shelter. *Spoiler for Defender* One guy got a hit on the sisters, because the dad killed his mom and he wanted revenge on him. However, daddy-dearest is dead. One of the hitman is dead the other is still hunting the younger sister which brings us to Wyoming Brave.

Basically, Merrie's life is in jeopardy, and one of her friend's brings her to his brother's ranch to keep her safe. Now the brother, Ren, is an a-hole to her. He's extremely rough around the edges, and he's coming off a bad relationship. He's also on I-don't-like-woman phase, so he's extremely rude to Merrie. While Merrie is extremely sweet and shy.

A few elements that might not work for some people: There is a pretty big age gap between the hero and heroine. She's been pretty shelter her whole life and hasn't had much experience. If these things don't bother you, you are off to a great start.

A lot of the story focuses on them getting past there hangups, Ren and his distrust towards women, and Merrie coming out of her shell. Overall, the story isn't a bad one. I seriously liked this one more than Defender. I'm glad to have read the other book, because this gave me insight to where Merrie is coming from. There were some parts that could have been left out. Oh well. I did like how Ren did soften towards Merrie, but he did messed it up a bit. However, things quickly found a way of working. So, if Wyoming Brave sounds like your kind of read go for it. Like I said it's not for everyone.

The prolific author of more than one hundred books, Diana Palmer got her start as a newspaper reporter. A New York Times bestselling author and voted one of the top ten romance writers in America, she has a gift for telling the most sensual tales with charm and humor. Diana lives with her family in Cornelia, Georgia.