All They Ever Wanted by Tracy Solheim (Review) 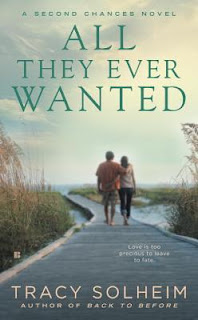 So, reading All They Ever Wanted by Tracy Solheim took a little longer than I expected. Nothing is wrong with this story, and I thoroughly enjoyed the story. Life wasn't working with me, so it took a little longer than expected. Okay, I haven't read Back to Before, but I totally want too. Yes, there are a few of the characters that would be found in the first book. It might help, because the story is moving forward. However, it's pretty easy to pick up the story from All They Ever Wanted, because the story focuses more on Miles McAlister and Lori Hunt. Lets get started.

Miles is politically driven and would do practically anything to make his political career the best. However, his family has a few skeletons that kind popped up and I'm guessing the first book. Best way to describe him he's politically driven. He projects himself as someone who is doing right. When he comes across Lori, he doesn't trust her.

Okay, Lori is hiding a big secret. Oh my gosh, I was dying to know what it is and how it could harm the McAlister. Boy it's a juicy secret, and we get tidbits here and there. It isn't until we draw closer to the end when we find out the whopper of a secret. It's scandalous and it made me feel bad for Lori. I hate when people judge to a person cause of their parent. People would have judge Lori, because of her family. I could understand why she kept her secret. I admire Lori for what she did, because she wasn't doing it out of selfishness, but out of love for someone.

A pretty amazing story. We have Lori and Miles pretty much at each others throats. Miles wondering what kind of secret Lori is hiding and Lori trying to keep her secret from leaking out and causing harm to the McAlister family. You have Miles who has no desire to love another again after his first love, but it has a way of seeking in when least expected it. There is so much in the story. I mean you have McAlister's family dynamics, Miles and Lori's attraction, Miles political aspiration and if he's willing to sell his soul for it. He comes close to selling his soul, good thing he has a good friend. Such a great story, and I can't wait for McAlister's. Patience was never my strong suit, I guess I will learn it. It was worth the time I spent, and I might have to reread again.