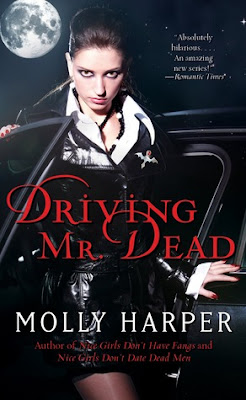 Like I said I have been on a Molly Harper kick, and I figure might as well start reading Driving Mr. Dead: 1) it's part of the Half-Moon Hollow series 2) I got to hear a sample of the story. 3) Miranda Puckett was mention in A Witch's Handbook to Kisses and Curses. However, I found Driving Mr. Dead is kind of in a weird space. It might be because it was published before the last Jane Jameson book, and before the first Half-Moon Hollow, so there are timeline issues here. Other than that it was a fun read.

We have Miranda Puckett who is a walking disaster, who needs time to think, because her fiancee is a douchebag. Yes, a walking douchebag, but he gets what he deserves. I wish it was a little more violent, oh well. Then we have Colin Sutherland. Oh Colin. Talk about a stick in a butt. The start of the road trip was probably not the most easiest. In some ways it made me think of Planes, Trains, and Automobiles as they were trying to make their way back to Half-Moon Hollow. Talk a Murphy's Law kind of trip.

Overall, Molly Harper brings another fun vampire story. A super quick read that will have you laughing from start to finish. Granted I did choke up towards the end, because of Colin's poor choice of words. Anyway, if you are need of an escape, you might want to take a road trip to Half-Moon Hollow in Driving Mr. Dead.