I admit it, I have a weakness.  And my weakness is romantic comedies.  There have been so many Saturday afternoons I’ve lost by walking through the living room when one of my favorites is playing on TV.  Laundry and errands?  What laundry and errands?  I have to spend the next few hours curled up on the sofa, watching Dirty Dancing for the 473rd time.  It’s this same magnetic pull toward a love story that inspired me to read romance novels, and to write them.  So I thought I would share with you one of my favorite romantic comedies, and the romance novel it reminds me of.

Pretty Woman and Any Duchess Will Do by Tessa Dare 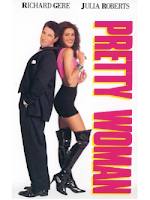 We all know the plot to Pretty Woman, right?  Important corporate dude hires a girl off the street to be his date during his business trip.  They fall in love, he screws it up.  But then he shows up in the white limo and climbs up the fire escape…It’s epic.  In Tessa Dare’s Any Duchess Will Do, a Duke hires a serving girl for a week to prove a point to his mother.  She fills the role of future Duchess, and he falls for her in the process.  It’s perfect for those of you who want to be swept off your feet by a Duke…which would be most of you…and me. *grins*

Do you have a favorite romantic comedy?  Does the plot remind you of a book you enjoyed? 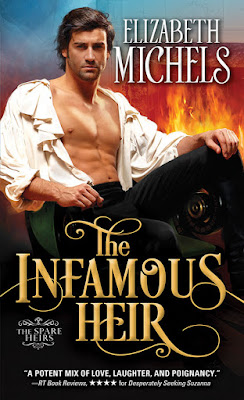 The Spare Heirs Society Cordially Invites You to Meet Ethan Moore: The Scoundrel

Lady Roselyn Grey’s debut has finally arrived, and of course, she has every flounce and flutter planned. She’ll wear the perfect gowns and marry the perfect gentleman…that is, if the formerly disinherited brother of the man she intends to marry doesn’t ruin everything first.

Ethan Moore is a prize-fighting second son and proud founding member of the Spare Heirs Society—and that’s all he ever should have been. But, in an instant, his brother’s noble title is his, the eyes of the ton are upon him, and the lady he’s loved for years would rather meet him in the boxing ring than the ballroom.

He’s faced worse. With the help of his Spare Heirs brotherhood, Ethan’s certain he can get to the bottom of his brother’s unexpected demise and win the impossible lady who has haunted his dreams for as long as he can remember…

“You can’t spare a footman to haul my trunks and valise inside?” Roselyn asked.
Mr. Ethan Moore didn’t seem to mind the rain that splashed down on them in the drive. “I’m afraid not.”
“Not a single servant to assist your guests as they arrive? And I thought Ormesby Place to be a welcoming, organized home. The devil it is.” She muttered the last bit under her breath, sure he hadn’t heard her.
“What was that, my lady?” he asked, leaning in.
“Oh, nothing.” How had he heard her comment? She always tried to be so careful of such things. It was as if the ugly habits she’d worked so diligently to eliminate from her life were rising to the surface against her will. And she blamed Mr. Ethan Moore for every bit of it.
“If your precious possessions mean so much to you, princess, I will personally assist you with your things.”
Finally he was going to see reason. She smiled in relief. “Well, that was all I required. Thank you.”
He bent and lifted the small valise from the top of the pile of trunks, slinging it over his shoulder with a grin. “That trunk looks light enough. You should be able to manage it.” With those careless words, he turned and began to stroll away toward the door.
Was he whistling? What an infuriating man!
Roselyn stood rooted to the ground in shock for a moment, watching him walk away through the rain. Then, something snapped within her. The gently bred lady she tried to portray was stripped away, leaving behind the young, reckless girl she thought she’d outgrown years ago. He couldn’t walk away from her in such a manner.
She took two steps to the edge of a flower bed, scooped up a fistful of fresh soil within her white- gloved hand and flung it as hard as she could at Mr. Moore’s back. Watching as it splattered across his upper arm, slinging droplets onto his cheek, she felt a moment of visceral triumph. Then she gaped at him.
What had she done? She hadn’t even considered doing anything so childish in years— not since that summer when she’d set a trap to trip him as he crossed one of the fields, then laughed as he tugged her down into the dirt with him. The memory of her laughter faded as reality set in. Her plans! What had she been thinking? But, of course, she hadn’t been thinking.
He turned, an affronted look crossing his face as he stared at her.
In that moment, in spite of their current ages, he was the boy next door again, chasing Katie and her through the woods as they cackled with glee. She bit her lip to keep from laughing.
He glanced down at his arm in disbelief, dropped her valise to the ground, and began prowling toward her. Oh. Perhaps this had been a mistake. A challenging gleam filled his eyes, turning them as dark as black water in a cold lake.
Oh dear. She blinked once, twice, then turned and ran.
She’d made it to the corner of the house where the edge of the lush gardens overlooked the moors when she felt a large hand wrap around her upper arm, dragging her to a halt. She could feel the heat of him behind her. She had never been so close to a man before. Her heart hammered within her body. Even Lord Ayton had never dared touch her like this. She’d never felt a gentleman’s body pressed into hers as Mr. Moore’s was now.
“Leaving so soon?” he murmured, his lips almost grazing the rim of her ear.

Praise for The Infamous Heir:

“Michels’s latest is the complete package: a captivating romance with gripping suspense wrapped up in a novel to be savored.”
— Publishers Weekly, STARRED Review

“Readers are treated to Michels’ strongest story yet. The engaging characters, intricate plotline and powerful love story hold readers from beginning to end as they watch the changing relationship between headstrong lovers as they unravel a mystery. Savor this tale.” — RT Book Reviews, 4.5 Stars and March Top Pick!

Elizabeth Michels grew up on a Christmas tree farm in rural South Carolina. After tip-toeing her way through school with her focus on ballet steps and her nose in a book, she met a boy and followed him a thousand miles away from home to Kansas City, Missouri, before settling down in North Carolina.

a Rafflecopter giveaway
Posted by Melody May at 8:01 AM