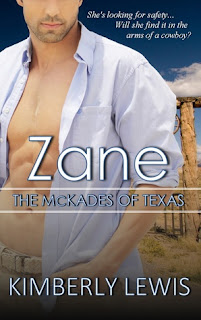 Few weeks back I listened to Zane by Kimberly Lewis. At first, I was a little confused, because the heroine's accent didn't match the other characters. I assumed she was from Texas too. Yeah, never assume. It's not until later in the story (extremely later) that we find out where she's from, and that's when everything became clear. That aha moment. I hate being late to the party on that account. It could have been, because the narration or the fact the author didn't share that information until later. Overall, the narrator didn't do a bad job, just might need a little work.

Now the characters:
Kellan/Andi: Lets start with the positives. She left an abusive relation. She tried to make a plan for her escape. Truth be told that is one the hardest things to do. She had no one to turn to.
My issues: She did fairly well on her escape, but she kept her cellphone. Rule #1 ditch the cellphone and buy a cheaper burner. I'm surprise the ex didn't call the police to report the car stolen. There were a couple other issues, but I'm not going to nitpick. Downward spiral there.

Zane: The cowboy who doesn't trust Andi or whoever she is. I liked him. He was looking out for his family when Andi drops on his doorstep.

McKade Family: Luke, Norah, and their mother. They basically welcome Andi without question.

Eventually, Andi settles into life in Texas and she starts to feel at home. It starts to slow down during the middle of the book, because everything seems to be perfect for Andi and Zane. I got to the point, okay were is this possessive ex, because abusers don't normally let things go. Waiting and waiting for something to happen. Eventually it does, but it's the last couple of chapters and it seem it went all too quickly. It wasn't bad, and I liked the ending because it picked up the pace. I also had a couple issues with the epilogue, because somethings weren't completely cleared up.

Overall, Zane wasn't a bad read (listen). There were somethings that could have improved. I'm curious about what will happen to Norah and Luke in their own stories.