Along Came A Rogue by Anna Harrington (Review) 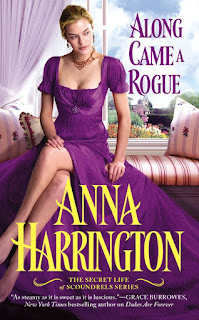 I finally finished Along Came A Rogue by Anna Harrington. I was aiming to finish before it released, but with the move and all it got push to the back burner. Which was sad, because it was good from the beginning to the end. I mean when you start off with the hero getting his cock suck right at the beginning you, it definitely grabs your attention. Yes, there are a few more steamier parts of the story, but that's not the story. Actually, Along Came A Rogue is more about the rogue doing his friend a favor.

Seriously, Nathaniel Grey was asked by his long time friend, Thomas Matteson, to go and fetch his sister. Thomas and his sister, Emily, haven't been talking for years, but when you are starring at your possible death you want to make amends. When Nathaniel gets to her she was getting read to flee, due some circumstance. She's a bit fearful of her life after the death of her husband. Emily suspected that her husband was murder, but didn't have proof. Anyway, she was fearful they might come after her when they found out the circumstance of her well-being. Oh yeah, her husband was the heir to a Marquess. Anyway, Emily is trying to stay her course, but Grey wasn't having any of it. Plus, have the dynamic of the two lusting after one another. I love rogues/rakes in books, because they have their own code of honor. You wouldn't think that of Grey who basically uses women, but when it comes to Emily he tries to protect her. Quite lovely. However, even a rogue can't resist her charms. Grey does warn her off, but when push comes to shove he can resist Emily. So, the journey back to London is definitely adventure for the two. I do love how Grey worries about Emily so much so that he was willing to give up his career for her. Of course, Emily freaks out about that and worries that he's doing it for the wrong reason. We get a chasm between the two. As stubborn these two are, they believe are doing what is right.

Anyway, Along Came A Rogue is definitely a great read. You have danger and adventure, and two people who are perfectly for one another. Yet, one is afraid to become a ball and chain to the other for fear of resentment later in life. However, the adventure that was originally planned might be the adventure the one needs. Poor Grey he had a hard time trying to convince Emily that she was the adventure he craved. Yep, Anna Harrington is an author worth checking out.