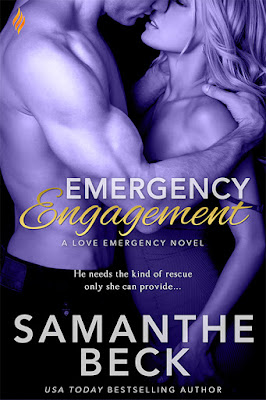 He needs the kind of rescue only she can provide…

Glass artist Savannah Smith expected a marriage proposal for Thanksgiving—just not from her strong, silent, super-hot neighbor. But when misplaced mail and a wayward can of paint lands them in a compromising position right as her family arrives for dinner, they assume he’s “The One” she’s been talking about.

Then his family shows up.

Fate dealt a crippling blow to paramedic Beau Montgomery’s heart, and he isn’t about to put it at risk again. Except, with his mother crying tears of joy over his surprise engagement to the sexy little blonde next door, he can’t bring himself to ruin her “Christmas miracle.”

Somewhere between the paint can to the head and the chaotic family trip to the ER, Beau manages to talk Savannah into being his fake fiancée long enough to survive the holidays.

If, of course, they don’t fall in love first…

“Our families might expect an occasional display of affection.”
His right palm tingled with the phantom weight of her breast, and his left hand twitched at the memory of cupping her tight, round ass. “I’m sure we can muster up something convincing.”
“I don’t know. You’re blushing pretty hard right now just thinking about it.”
The allegedly logical part of his mind insisted she had a point. “You want a demonstration?”
She tipped her face up, shook her hair back, and he caught a flowery hint of shampoo or perfume, or maybe just her drifting under the antiseptic hospital smell.
“A dress rehearsal might be in order. I don’t mean to criticize, but the last time you kissed me, your technique needed work.”
He had no idea what she was talking about, but he had a strong and unwise desire to trace every curve of her teasing grin with his tongue. See if she tasted as sweet as she smelled. “I think you’re confusing me with someone else, Smith. We’ve never kissed before.”
“My mom’s got a photo that tells a different story.”
Another small step on her part brought her body flush against his. The move produced a swift inhale from her, and then her eyes rounded at the evidence of what he’d mustered up pressing against her stomach. He found both reactions extraordinarily gratifying. She rested her palms on his chest. Having her hands on him also didn’t suck. “Exactly how old was I in this alleged kissing photo?”
Her gaze traveled over his face and came to rest at his mouth. “Fairly young…and fairly naked. We both were. To be honest, if not for the nudity, I’d have a hard time telling us apart.” She licked her lips.
“Well, brace yourself, Savannah. I’m all grown up, and you’ll know which one is me, even with our clothes on.” 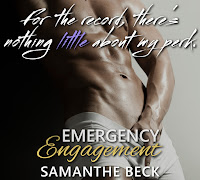 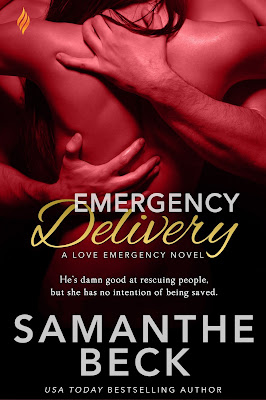 Madison Foley is determined to stand on her own two feet, no matter how wobbly her circumstances. Fate, however, keeps throwing her off balance, and then sending heroically hot paramedic Hunter Knox to save her.

She’s put men on the back burner until she gets her life on track.

But Hunter’s got other plans.

Where do I beginning with Emergency Delivery. First off, Madison Foley is one lucky girl (even for a fictional character), because her delivery could have gone so wrong. However, she had the reassurance of a hot paramedic even though she was extremely embarrass by the situation. Fortunately Hunter knows how to ease a girl by telling her what she needs to hear at the time:

"Would it help if I told you I'm gay?"..."Maybe." She wiped the team sniffled, and lifted her head. "Are you?"Hunter gloved up and her a grin. "Me and this guy have"..."have been partners for a long time. Say hi, Beau."

We have to make sure the patient is all right. Hunter Knox is a good looking paramedic who has a bit of a savior-complex. Plus, he has the goal and determination to become a doctor, but the savior-complex gets in the way. He finds a damsel in distress in Madison.

I adore Madison, because she doesn't want to be the damsel in distress kind of girl. Even though Hunter has basically offer to help her, she plans to get on her two feet and repay Hunter's kindness. Hunter will pop an ovary by how he cares for Madison and her daughter Joy. At the same time he's trying to get into med school, yummy.

I did enjoy Emergency Delivery. Hunter can melt butter by his actions. However, Samanthe definitely puts in some zingers too. One of my favorites is when Madison is trying on one of her dresses for a wedding:


"I look like a reject from The Real Housewives of Atlanta."

That one had me in stitches. However, we also find some sentimental ones with little oomph, like:


"I need you,"..."And Joy, I need to spend my evening gently rocking that drowsy little girl to sleep, and then not-so-gently rocking her mama to sleep."

Sweet and sexy, which makes Hunter a yummy catch. They were compliment one another. Yes, they get down and dirty, but it's pretty tame for a Brazen book. It's a little hard when you are recovering from childbirth, and you just don't find your self sexy. However, Hunter makes Madison safe and wanted. Don't get me wrong they did have a couple bumps in the road, one being the ex, and Hunter needing to distinguish between wanting her and the savior complex. Overall, a pretty good read.

Copy provided by Entangled via NetGalley. 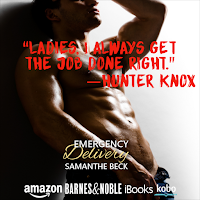 Wine lover, sleep fanatic, and USA Today Bestselling Author of sexy contemporary romance novels, Samanthe Beck lives in Malibu, California, with her long-suffering but extremely adorable husband and their elementary-aged turbo-son. Throw in a furry ninja named Kitty and Bebe the trash talking Chihuahua and you get the whole, chaotic picture.

When not clinging to sanity by her fingernails or dreaming up fun, fan-your-cheeks sexy ways to get her characters to happily-ever-afters, she searches for the perfect cabernet to pair with Ambien.

a Rafflecopter giveaway
Posted by Melody May at 8:47 AM