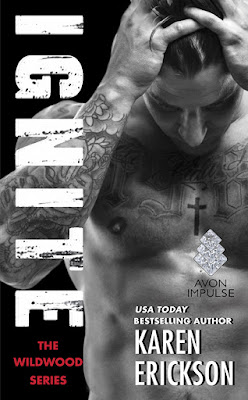 Weston Gallagher is falling hard—for the wrong woman.
One night of passion has haunted him for years.
Now he’s got a second chance to get the girl of his dreams…but there’s just one problem:
She hates him.

Eight years after he stormed out of Wildwood, California, West has returned to his hometown as a firefighter. His friends and family are thrilled he’s back—with the exception of Harper Hill. His sister’s best friend is all grown up and in all the right ways. He knows she’s going to do everything she can to protect her heart and keep him at arm’s length, but West has other ideas.

He will win the girl that got away. No matter what it takes…

My Thoughts:
I was excited to hear that Karen Erickson was going to start a new series. I have to say that I have enjoyed her other books. I heard about Ignite I had to read it. Yes, you have the sweet girl next door who has a crush on her best friend's brother, and he being the bad boy troupe. Excited! Lets meet the good folks of Wildwood, California.

We meet Harper Hill, she's sweet kind and dubbed the Wildwood welcoming bandwagon. However, she has a sore spot when it comes to Weston Gallagher. After all, they have a make out session one night, and the next day he's gone without a goodbye. Now West, the local bad boy. When he left Wildwood he wanted to get out of his shadow of his father. After all it's no fun getting to compared your father even if he's a decent guy, sometimes you want to be your own person.

West is funny when it comes to Harper. I mean he gets all schoolboy like, and word vomit just happens when he's around Harper. However, he never sees himself good enough for her, and they start to have fun together.

I enjoyed Ignite, because Karen brings these two unlikely characters together. At the same time we meet the people who are going to be involved with the series: Lane Gallagher, Tate Warren, Wren Gallagher, and Delilah Moore. On top of that there is an arsonist in the midst. Who knows what's going to happen in Wildwood. I can't wait to see how the series plays out, but I did enjoy West and Harper's story.


"No one has it all together. Not really. Just because they act perfect or have the perfect job or the perfect-looking boyfriend or husband or whatever, no one is perfect. We're all struggling, all trying to live our lives as best we can."


Copy provided by Avon via Edelweiss 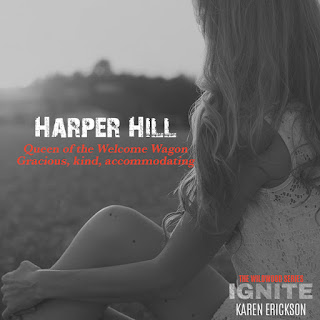 “I remember exactly what you felt like in my arms, that night I kissed you,” he continued. “What you tasted like. The sounds you made. How you’d clutch me closer every time I tried to pull away.”
She dipped her head forward, her eyes tightly closed as she remembered too. The way he felt, the sounds he made, the way he tasted. He shifted closer, his mouth—oh God his mouth— was right at her nape, his hands resting lightly on her hips. “I’m curious to see if it’s still just as good between us,” he murmured against her skin, his warm lips making her shiver.
His hands on her body and his mouth moving against her neck made her want to melt. It was going to be good. So good she would probably combust at first touch of his mouth on hers.
“Turn around, Harper,” he whispered into her hair, and she opened her eyes, turning slowly so she could face him. Her knees were so wobbly she leaned against the front door so she wouldn’t fall to the ground in a boneless heap. West stepped into her personal space, his big hands braced against the door on either side of her head, his intense gaze zeroed in on her lips. “I didn’t plan on this happening tonight.”
“Plan on what happening tonight?” she asked with a slight frown. Oh God, maybe he didn’t want her after all. Maybe he was trying to let her down easy? She should’ve just left. It was complete torture, knowing he was most likely going to say something nice so he wouldn’t hurt her feelings. She held her breath, waiting for the inevitable blow.
“This.”


His lids lowered as he dipped his head, his mouth landing on hers and her eyes slid closed once more, relief flooding her as she automatically reached for him, looping her arms around his neck. He didn’t touch her, his hands remained on the door, but his mouth did wondrous things. Soft and seeking, warm and damp, his lips brushed against hers once. Twice. She parted her lips beneath his the third time but he didn’t take it any deeper. No, he was slow, methodical, purposeful. Learning her, driving her out of her mind. 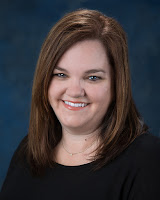 USA Today bestselling author Karen Erickson writes what she loves to read – sexy contemporary romance. Published since 2006, she’s a native Californian who lives in the foothills below Yosemite with her husband and three children.

GIVEAWAY DETAILS:
Karen’s publisher is giving away a $25 gift card (Amazon, B&N or iBooks) to one randomly chosen winner.

a Rafflecopter giveaway
Posted by Melody May at 7:00 AM