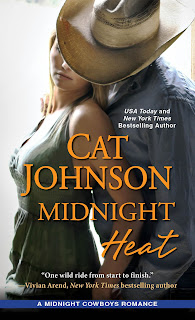 Midnight Heat by Cat Johnson was a nice read. There wasn't too much drama, which there could have been more. Here's why:

We have Phoenix Montago who grew knowing she was adopted, and doesn't wonder about her birth mother. She was okay knowing the fact that she was adopted, but when she requests a copy of her birth certificate cause she lost her original, she finds out who her mother is and starts to wonder. She sets out to find her mother to get answers to questions never had before this moment. All right, I have no problems with this. Everyone eventually wonders where they come from when they have been adopted. Phoenix sets out for this adventure. However, there are few bumps in the road, like the fact her mother moved to Oklahoma, and there is some guy taking back the stuff to there. Poses a challenge on meeting the lady who gave birth to you.

Now Justin Skaggs is picking up the stuff for Bonnie Martin to take back to Oklahoma when he stumbles upon Phoenix. He doesn't know if could trust or if she's some weird person who wants to hurt Bonnie. Understandable. He ends up getting to know Phoenix and likes being around her. However, Justin comes with his own set of problems. Him and his mother are still grieving the lost of Jeremy (his brother). Now his mother hasn't been handling it all that well, and I think she needs grief counseling. Hey, everyone handles grief differently, and there is reason for her behavior. My issue about this situation is how it was handle in the story. By the end she was starting to be social and working towards being human again. I have no problems with it, but I would have liked to see how it was handled not poof she's starting to feel better. How did she overcome this debilitating depression? One minute she's down, next she's working her way being healthy again.

My other issue was Phoenix finding out birthing family, then telling her adopted parents what she did after the fact. Her adopt parents were happy to see her and willing to bring her into the family. Cool. Works for me. What didn't work for me was it was glossed over when she decided to be truthful her adopted parents. How did they handle the news, were they hurt by her actions? I don't know. Someone was hurt by this, but it's glossed over.

The romance between Phoenix and Justin was super quick and everything was starting to fall into place. Yes, there could have been a little more drama. It wasn't a bad read, but it wasn't a great read. There were some gaps that bothered me. Some people loved this book. It was an okay read.