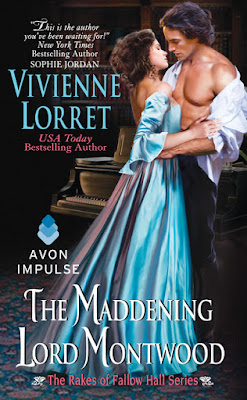 Blurb
Frances Thorne learned at an early age to rely on herself. Yet, losing her job and her home and watching her father carted off to debtor’s prison all in one day, is too much for her to bear alone. When a generous offer of assistance falls into her lap, she ignores her better instincts and decides to take a chance. The last thing she needs is for the infuriating Lord Lucan Montwood to stand in her way.

The end of the bachelors’ wager is near, and Lucan Montwood can taste victory. Yet, on the precipice of finally gaining freedom from his debts, he’s incensed to learn that the beautiful Frances Thorne has fallen into an insidious trap in the guise of a new position. Lucan can’t deny the way her lips call to him and knows he must risk his own future to ensure her safety.

Convincing her to trust him is the hard part and resisting her is next to impossible. But falling in love with her? That’s far too simple.

I have enjoyed this series immensely, and The Maddening Lord Montwood is definitely the perfect ending to the series. I adore how Lucan story reveals so much more that relates to the series and gives the insight of why the wager was made. Actually, the insight why Lucan needed to win the wager.

Throughout the series we saw Lucan as the main instigator when it came to trying to push Rafe and Gabriel into marriage. We actually don't see a lot of them in Lucan's story. They are there, but they don't play a huge role into the story. The story focuses on Lucan, Frances, Lord Whitelock, and Hugh Thorne (Frances's father). There some twist to the story I didn't see until the end.

The Maddening Lord Montwood is trying to help Hugh Thorne, but he can't tell Frances anything cause of the slime ball Lord Whitelock. Whitelock manipulates the situation for his benefit, but no one knows. Throughout the story he's described as

"he's too good to be true. Never heard a bad word so much as a whispered about him. No one is that crisp and clean on the outside without a wrinkled soul on the inside."

Personally, he reminded me of a snake in the grass, I don't like snakes, and he gave a creeptastic vibe. We slowly learn about Whitelock's character. However, Frances doesn't believe he's an evil guy at first, but slowly starts to realize.

I adore Lucan and Frances. I like that we got to know Lucan a little better. He's charming, but it's an act. I like that deep down he cares about people. He goes out on the limb for Hugh, but he doesn't tell Frances the whole situation. Frances is an interesting character, because she took all the lessons of her mother to heart. However, she does get blinded by Whitelock's character at first. Snaky like. I'm so glad things started to click together.

Like I said, a perfect ending to the series. We have a snaky villain, and hero that doesn't consider himself a hero. Yet, when it boils down he saves the day and gets the girl. This can be read as a standalone, but I think it's funner to read in order. Take a chance on Montwood and watch him take on the challenge that is Whitelock.

USA Today bestselling author VIVIENNE LORRET loves romance novels, her pink laptop, her husband, and her two sons (not necessarily in that order ... but there are days). Transforming copious amounts of tea into words, she is proud to be an Avon Impulse author of works including: “Tempting Mr. Weatherstone”, The Wallflower Wedding Series, and the Rakes of Fallow Hall series.