Beyond the Cut by Sarah Castille (Review) 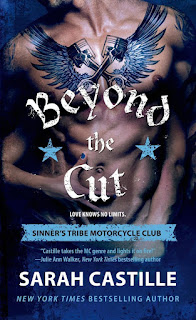 Who knew I would find myself enjoying a MC romance. It's not something I would have seek out, but I'm enjoying the Sinners's Tribe Motorcycle Club books. A lot crap is going down, the sinners are trying to patch over other gangs to build up their numbers so they can fight against the Jacks. However, one of the gangs they are trying to patch over comes with issues. For instance, they are up for president re-election, and the current president would like to patch with the Sinners while the other would like to patch with the Jacks. That's going on; lots of complications. If that wasn't enough we have Cade wanting just one woman, Dawn.

The Cade and Dawn situation is a bit complicated. We have Cade who is a manwhore. When you have a lines like:


"Voted 'Least Likely Ever to Settle Down' five years in a row. Winner of the 'Most Sweet Butts in the Bed at One Time' prize. 'Biker Manwhore of the Year.' Author of 'How to Get Laid in Less than Thirty Seconds and Leave Your Friend Drinking Alone at the Bar.' The man who researched beds big enough for six. The list goes on."

For him to want a woman more than once is a huge deal. Like I said it comes with complications. Dawn has no desire of being a biker's Old Lady, been there done that, and  it didn't end well. This attraction between Cade is kind of scary. On top of that she's trying to get her kids back from her ex-husband, who happens to be an asshole and another biker. Remember I mention about another dude wanting to become a president and patch over to the Jacks, well Mad Dog is that guy. Mad Dog seems to believe Dawn still belongs to him. Cade sure knows how to pick his women.

Anyway, Beyond the Cut was a little slow at the beginning. Basically, we have Cade trying to get Dawn into his a little more than once. When the trouble arrises with Mad Dog, Cade goes into protective mode and would do anything for Dawn. It's more than wanting her in his bed, but he doesn't know that. I like how Cade tries to help Dawn realize that not all biker dudes are like Mad Dog. This is hard for Dawn, because she has been through a lot. In her short life she has suffer all types of abuse, so she has this trust issues.

Once the action starts in Beyond the Cut the story starts to pick up pace and there were times I just trying to turn the page as quickly as I can. Overall, it's a pretty good read. I'm looking forward to see what happens next, because the thing with Jacks isn't going to magically disappear. Sounds like they are gearing up for war.