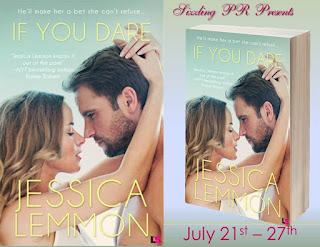 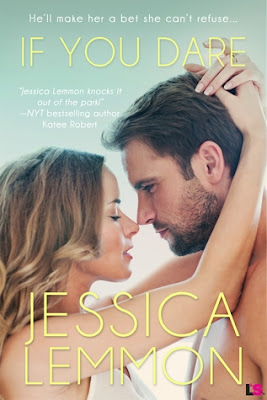 About the book:  Lily McIntire is in the creepiest mansion in town. Alone. At night. Because she’s an idiot—and can’t ignore a dare from her cocky and infuriatingly hot co-worker, Marcus Black. But she'll be damned if she's going to give him the satisfaction of winning.

Marcus has had a thing for Lily for ages, and he has no intention of losing this bet. His plan? Scare her out of the house, and into his arms. Once there, scaring her turns into protecting her and soon after, into seducing her. And his plan is working…

Lily is having trouble relegating Marcus to the role of “asshat” as easily as before. He came to her rescue, and he’s actually funny. Charming. Sexy as sin on a stick. But Lily has a strict no-love-in-the-workplace rule, and even one night of the best sex ever won’t make her change her mind. So she’s calling everything off…

Surviving a night in the mansion might just be the easy part. Surviving Marcus’s increasingly convincing advances is going to take everything she has. Losing is not an option…

NOTE: This title was previously published November 2013 on Flaunt as a novella but has been significantly revised and lots of yummy new scenes added to give readers a full-length category romance full of humor and sizzle.

Excerpt from If you Dare:

He cared about her enough that he was going to continue this insane idea to keep things quiet even though he didn’t like lying to his friends. But not for long. And he needed to let her know that. She sat, legs kicking over the edge of the desk, hair rolling over her shoulders, white shirt doing nothing to hide her peaked nipples...
He’d let her know later. After desk sex.
“Don’t rip my buttons this time. I still have to drive home.”
Why, why did rod-up-her-ass, Lily McIntire do it for him whenever she was being rigid? Probably because he knew she really wasn’t. As a matter of fact, under his hands and his mouth, she was downright pliant. Like melted peanut butter.
Mmm, too bad he didn’t have that in his food cabinet at work.
“Okay, you take it off.” He smoothed his palm over her bare calf down to one rather demure heeled shoe, which he removed and tossed over his shoulder. It thudded to the floor behind him.
“Do you have any idea how much those cost?” Her brow furrowed, fingers hovering over the top button of her blouse.
“Nope.” He moved to the other leg, slid that shoe off, and tossed it into the metal trash can next to his desk. It hit the side with a clang. “Now ask me if I care.”
She gave him a scolding look, but since she was undoing her shirt buttons – and not slowly – he didn’t mind. Not that he’d mind anyway. Lily’s scolding looks were kind of cute.
“Did you get the salon plans approved?” She continued working her buttons, her attention on her shirt. By the time she was pulling it off her shoulders, he was thoroughly perplexed by this turn of conversation. “I was thinking about it today and wondering if it wouldn’t be nice to have a drink station where customers could help themselves. Coffee, tea, maybe a few nice wine selections...”
He held up a hand to stop her. “Are you under the assumption that talking about salon floor plans turns me on? Because it does not.”
“No, I’m not assuming anything. I’m just making conversation.”
His eyes went to a decidedly plain white bra that somehow still looked sexy on her. “Why?”
“Because you said you wanted to work tonight.”
“On getting you naked,” he said. “But I couldn’t exactly blurt that out in the meeting, now could I?”
Before she could argue, which she was poised to do, he stopped the words in her throat by reaching behind her back, flicking the clasp on her bra, and sliding the straps halfway down her arms. “I love that they’re peach.”
“What?” She blinked down at her bare breasts.
“Your nipples.” He ran his thumb over one, watching it harden further under his touch. “They’re perfect.”
“If you’re trying to prove you’re good at seduction, there’s really no need.”
He moved her slim-fitting skirt high on her thighs. High enough to spread her legs and insert himself in between. “Careful, McIntire, that was almost a compliment.”

A former job-hopper, Jessica Lemmon resides in Ohio with her husband and rescue dog. She holds a degree in graphic design currently gathering dust in an impressive frame. When she’s not writing super-sexy heroes, she can be found cooking, drawing, drinking coffee (okay, wine), and eating potato chips. She firmly believes God gifts us with talents for a purpose, and with His help, you can create the life you want.

Jessica is a social media junkie who loves to hear from readers. You can learn more at: 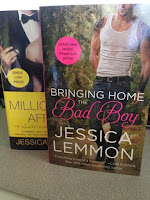 a Rafflecopter giveaway
Posted by Melody May at 6:33 AM