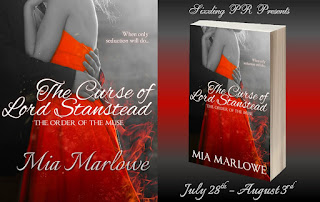 The Curse of Lord Stanstead
The Order of the MUSE, #1
Mia Marlowe
Entangled Select Historical
July 28, 2015 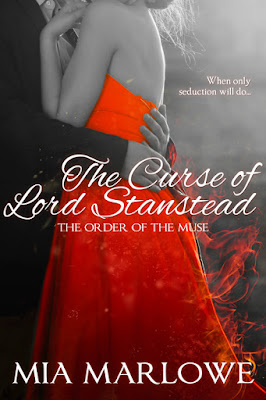 About the Book:
Wherever Cassandra Darkin goes, fire is sure to follow. It's not until she's swept into the arms of a handsome, infuriating stranger that she learns she's responsible for the fires. As it turns out, Cassandra is a fire mage...and with her gift comes a blazing desire for sins of the flesh.
With his pretenatural ability to influence the thoughts of others, Garrett Sterling is sent to gather Cassandra for the Order of the M.U.SE. He's entirely unprepared for his immediate attraction to the comely little firestarter. But it's an attraction that he must quell, even as his body craves her touch and her fiery, sensual hunger.
For Garrett's gift has a dark side...and the moment he begins to care too much for Cassandra, he knows he will doom her to an inescapable fate.

Excerpt from The Curse of Lord Stanstead:


Garret Sterling and Cassandra Darkin are on a mission for the Order of the M.U.S.E. to recover a psychic relic called the Infinitum. Using their unusual gifts, they’ve crashed a party that’s descending into a bacchanalia because the relic is believed to be there. Garret has just confessed to Cassandra that if he dreams about someone he cares for, something terrible happens to them. Like his fiancée Alice who died a few days before they were to be wed…

“After Alice died, I didn’t care about anyone or anything,” Garret said. “My destructive behavior was just a way to stop feeling pain. But now all I can see, all I want to see, is you.”
She leaned on his chest, snuggling closer. She wanted to fill him up, as thoroughly as he filled her.
He bent down and murmured into her ear. “I want to do such lovely wicked things to you. I’d have you singing my name, begging me to go on.”
Then he claimed her mouth in a savage kiss. She rose on tiptoe to meet his fury. She wanted to be enough for him. For him not to need anyone else to ease his pain. She kissed him back with all the longing inside her until he pulled back.
“What did you do to forget?” she asked in a gasping whisper.
“Women, mostly, that wasn’t all. I buried myself in opium, in whiskey—anything I thought might work. Anything not to dream again.”
His evil dreams. Her heart ached for him afresh. She couldn’t even feel jealous of his lovers in the past. He was her entire world in the present. His brokenness hurt her, too, and she longed to find a way to make him whole.
Somehow, they had to discover a way for Garret to be rid of that nightmarish aspect of his psychic power. She lifted a hand to palm his cheek. Her arm felt strangely heavy, but she wanted to comfort him. She yearned to make it better. To lie down right there on Old Lady Bellefonte’s Turkish rug and give him ease of her body, never mind that anyone might look on. She wanted to—
“Steady on, now,” Garret said, catching her when her knees gave way. “There must be something in this incense. A drug designed to lower inhibitions.”
“It seems to be working.” Cassandra wrapped her arms around him. “It’s so hot in here, isn’t it?”
The fireplace had been cold, but between one blink and the next the single log on the grate burst into flames. She’d lit the blaze without conscious thought.
Garret’s eyes went wide. “Cassie, are you all right?”
“No, I’m not all right.” She pressed feverish kisses to his exposed neck. “Oh, you taste wonderful—salty and male. I want to… Oh, Garret, I want to taste you all over. Why don’t you let me? You always give and give and never take.”
“If I took you now, it would be like stealing.” Garret picked her up as if she weighed no more than a child. “We need to get you out of here. Where do we go?” 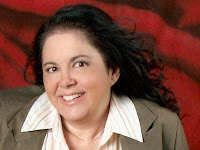 Mia learned much of what she knows about storytelling from singing. A classically trained soprano, she won the District Metropolitan Opera Auditions and has shared a stage with Placido Domingo. As she prepared for operatic roles, she devised back stories for her characters. Since she’s worn a real corset, and had to sing high C’s in one, she empathizes with the trials of her fictional heroines. But in Mia’s stories, they don’t die in a Parisian garret. They get to live and keep the hero!
Now an award-winning author, Mia Marlowe writes historical romance for multiple publishing houses—Entangled, Kensington & Sourcebooks. Mia’s work was featured in the Best of 2010 issue of PEOPLE magazine. One of her books is on display at the Museum of London Docklands next to Johnny Depp memorabilia. The RITA nominated author has over 20 books in print with more on the way!
Mia loves to connect with readers. For more, please visit http://www.miamarlowe.com

a Rafflecopter giveaway
Posted by Melody May at 5:26 AM