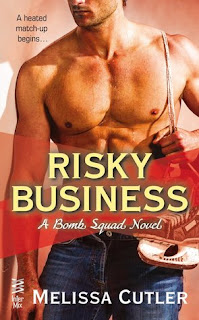 Welcome to Destiny Falls, New York, home of the Bomb Squad—an ice hockey team full of rugged military heroes. But the season’s biggest match-up isn’t on the ice as one of their own prepares to go head to head with his new boss…Allison Whitely’s ex left her with a mountain of debt and Cloud Nine, a struggling boat rental business. With zero job skills, her only hope of getting back in the black lies in a brooding ex-soldier who has her seeing red…Theo Lacroix’s teammates are counting on their star player to help them win an upcoming high profile hockey game. But when a sexy tornado of a woman sweeps into town and expects him to help her with Cloud Nine, Theo is tempted to skate away from it all.Theo vowed to never again be someone’s knight in shining armor, but his feelings—and desire—for Allison are becoming harder to ignore. He longs to save her, but to win Allison’s love, he’ll have to throw out his old playbook and take the ultimate risk…playing from the heart.

Nothing says yum like a hockey boy. Seriously, I have been tempted to watch the sport, because hockey books. Anyway, what do you guys think of my pick?