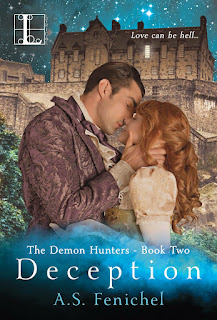 I think I need to start off with the cover of Deception, because I love it. I love the night setting and castle in the background, very beautiful and romantic. Yes, I wanted to read this story, because of the cover. When decided to read this I didn't realize it was a two in a series. Even though it has it on the cover, I was enthrall with rest of the cover that I didn't even notice. However, I persevere and tackled the story. Granted I was a little lost at the beginning and it might have helped a little to read the first book. So, the first couple of chapters I was playing catchup, but once Dorian and Lillian ventured off to Edinburgh. That's when the story started to get interesting.

Now Dorian has had the hots for Lillian, but the more time he spends with her he's like "she's the one." However, Lillian has no desire to marry after all she's a demon hunter and there is so much uncertainty that it isn't worth getting involved with a man and all it entails. She's open for flings and becoming friends afterwards. Yet, Dorian wants to be more than a fling, so he decides to take it somewhat slowly but sleep with her. Plus, she views herself as a nobody. She's a person, but she just never viewed herself becoming more than some mans mistress, after all she comes from lowly birth. Dorian sees that she's more than that and is willing to do anything to prove that she's worth more than what she has deem herself worth. I really like Dorian, because he's just persistent. I also like Lillian stubbornness. Normally that would grate on my nerves, but I could see where she's coming from. I admire that she didn't cave to Dorian, because it would have been so easy to say yes. She did truly care for him and worry about what would happen if they became one.

Overall, Deception was an interesting read. You have these two people who come from different backgrounds come together, but they are fighting for the same cause. I didn't talk much about the demon issues. Yes, it's pretty bad and they are trying to clean up the mess that was made. Not only that they have traitor. Never easy thing to deal with. Yes, you have the romance during  difficult time. However, it is what draws Dorian and Lillian closer. I have to say that it is definitely a unique read that has me kind of curious on to see what happens next. They are just touching the tip of the demon problem.