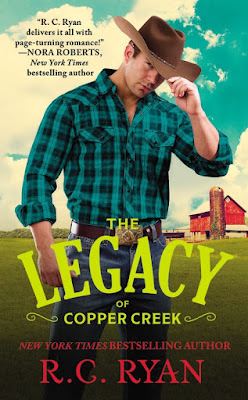 When Love Walks Through the Door . . .
Like all MacKenzie men, Whit respects three things: hard work, his family, and the wild beauty of the Montana land he calls home. The solitude of the high country is a welcome respite to a loner like Whit. So when a powerful spring snowstorm hits as he's tending the herd, Whit heads to one of the family's isolated cabins. The cold winds don't trouble him. The gorgeous mystery woman waiting inside does. All Cara Walton wanted was a chance to clear her head. And the forgotten cabin on the outskirts of the MacKenzie ranch seemed like the perfect place to do just that—until Whit arrives. The rugged cowboy quickly melts Cara's defenses and she's powerless to resist his strong arms or his tender touch. She desperately wants to trust him, but there's so much Whit doesn't know, so much she hasn't told him. She lost everything once—can she find the courage to risk her heart again?

What a perfect ending to a series. We have been watching as the mystery of Copper Creek has been unfolding. Which each book we draw closer to who killed Bear MacKenzie, and we finally find out who did it. Of course there have been clues along the way, but you really put them all together in The Legacy of Copper Creek. You start to see everything fall into place and go oh my goodness I think I know who did. At the same time you wonder if you believe what you suspected. So, that aspect of the story is awesome. Okay, now lets get to the lovey-dovey part of the story.

I love this story. So, we get Whit who actually doesn't mind the solitude of being out in the high country where there is no where around. If you have been to Montana there is a lot of that. For a guy who likes his solitude he can get a bit grouchy when someone is encroaching on his area, especially when he's too tired. It was kind of fun to watch him stumble upon Cara and she's scared out her mind because there is this big burly angry guy coming into a cabin she was squatting in. Good times. She has been dealt some rotten cards, so she doesn't know how to handle the situation at hand. After all she's on the run from the guy with evil eyes, and she doesn't know if she can trust Whit. However, she slowly learns to trust him and he takes her to meet the family since she has no place else to go. Here is where she starts to blossom.

I absolutely love Whit and Cara characters. You have Whit who likes his solitude, but he doesn't mind being around Cara. He finds his protective side coming out, once he starts to get to know her. He's an overall good guy. Like I said Cara has been dealt a pretty crappy hand. I have mention she was on the run from evil eye guy, and she screwed by some wealthy jerk, so she's a little leery when it comes to guys. However, that is not all. She's also creative and vivid imagination, but she's afraid to share that with anyone cause some jerk basically told she was a nobody.

The Legacy of Copper Creek is a great ending to the series, because we find out the reason behind Bear's attack, and we have Whit and Cara who find each other. Both believing they wouldn't someone that would care so much about each other. We even see the things start to bloom between Willow (Whit's mom) and Brady (Ranch Foreman), but that has been in the works for a while. You kind of notice it the other books, but it's a little more clear in this story. Finally, there is a happy ending with closure (by the way the epilogue is sappy but oh so good. Very nice touch). Overall, a great read. However, I would suggest reading this series in order, because each book adds a little more to the piece of the puzzle on who killed Bear. Other than that the romance aspect can be read as a standalone (if that makes any sense to you all).

Excerpt from The Legacy of Copper Creek:

The door opened and the woman who’d been on his mind stepped into the snow and started toward him.
“I feel like Nanook of the North.” She was grinning from ear to ear.
He was relieved to see the smile back in her eyes. “You look like my nephew Casey when his mother puts him in a snowsuit. It’s like a straightjacket and he can barely move. Can you bend those arms?”
With a laugh, she walked stiff-legged and stiff-armed in his direction. “What arms? Are there arms under all these layers?”
He was laughing as she bent down and, without warning, scooped up a handful of snow before taking aim. It hit him squarely in the face.
His smile turned into a look of surprise before he set aside the ax and filled both hands with snow. “Goldilocks, that was a declaration of war. And you don’t stand a chance.”
Seeing what he planned, she ducked, and the snowball he tossed landed harmlessly on the bark of a tree behind her.
“A certain cowboy needs to correct his aim.” She scooped up more snow and sent it flying toward his head.
Before she could blink, a handful of snow landed on her cheek and found its way down the collar of her parka.
Just as she brushed it aside, she looked up to see him racing toward her.
With a squeal, she turned and started running.
In quick strides he caught up with her and wrapped both arms around her, lifting her clean off her feet. In one quick motion, he scooped up snow and lobbed it right at her.
“Oh, you’ll pay for this, Cowboy.” She was still wiping away the snow when he bent down and filled his hands with more.
Seeing that, she dropped to her knees and did the same.
“Not on your life, woman.” Whit leapt on her, moving so quickly she was pinned beneath him, and they sank into a snowdrift tall enough to bury them both.
He grabbed some snow and held it up menacingly.
“You’d better apologize for that sneak attack, Goldilocks, or your face is going to freeze.”
She held up both hands in a sign of surrender. “Whit. No. I’ve had enough.”
Laughing, he tossed aside the snow. When he looked down at her, he realized too late that it had been a mock surrender. Laughing, she tackled him and rubbed a snowball into his face, forcing him to eat a handful of snow.
“Quite the little actress, aren’t you? Now you’ve done it. I won’t be fooled again by your cheating.”
“I wasn’t cheating. I was using war strategy.”
“Here’s your strategy.” Straddling her, he smeared snow over her face just as she did the same to him.
They both froze in place, laughing so hard they could barely catch their breath.
“I love the devious way you think, Goldilocks.”
“You mean, the same way you do?”
“Yeah.” Whit leaned close enough to touch his forehead to hers. And immediately realized his mistake.
Up close, her face was glowing and her lips, pursed in a perfect little pout, filled his line of vision.
“I think I’ve found a way to end this war.”
Seeing the way his gaze burned over her lips, she understood his intention and tried to turn her face away.
He reached up and caught her chin so that she could do nothing more than watch as his face slowly descended toward hers.
“You’d better declare a truce, Goldilocks.”
“Never.” The word was forced from her suddenly dry throat in a low, drawn-out whisper.
“Oh, I do love a challenge. Don’t say I didn’t warn you.”
His mouth closed over hers in a kiss that was as shocking to their systems as the snow had been just moments earlier. A kiss that sent tiny spears of fire and ice dancing through both their veins.
“Ready to declare a truce?”

New York Times bestselling author R.C. Ryan has written more than ninety novels, both contemporary and historical. Quite an accomplishment for someone who, after her fifth child started school, gave herself the gift of an hour a day to follow her dream to become a writer.  In a career spanning more than twenty years, Ms. Ryan has given dozens of radio, television, and print interviews across the country and Canada, and has been quoted in such diverse publications as the Wall Street Journaland Cosmopolitan. She has also appeared on CNN News, and Good Morning America. R.C. Ryan is a pseudonym of New York Times bestselling author Ruth Ryan Langan.

Giveaway Time:
Alright there is Rafflecopter giveaway. Yay, but Forever is also letting me give an extra copy of The Legacy of Copper Creek (US Only). SWEET! Okay, all you have to do is leave your name, an email or if you don't want to leave that another way to contact you (like twitter, Facebook, tsu, whatever).

a Rafflecopter giveaway
Posted by Melody May at 8:05 AM