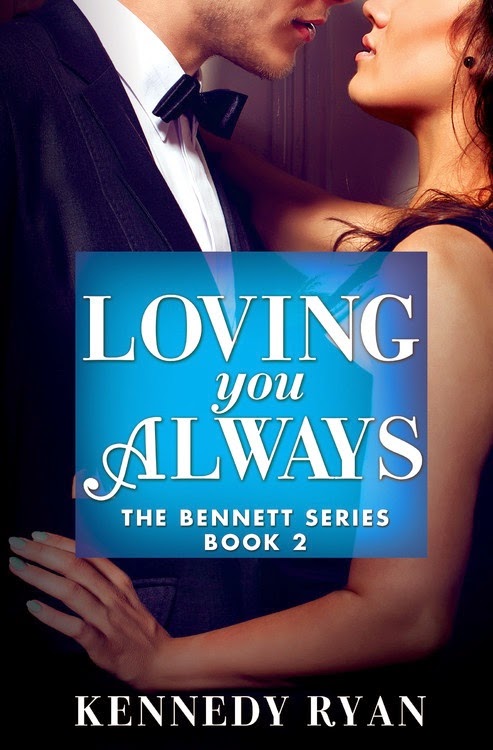 Kerris Moreton should be the happiest woman in the world: She has a successful business and is about to start the family she's always wanted. But the man of her dreams-the one whose green eyes see straight into her soul and whose gentle hands make her body hum with pleasure-is not hers.

Each secret moment with Walsh Bennett serves to remind Kerris of what she's missing. And every stolen hour makes it harder to see her future without him. But being with Walsh would betray a sacred promise and upend her perfect life. When tragedy strikes, the razor's edge between love and loyalty grows sharper than ever. And Kerris must decide where her heart will fall

My Thoughts:
I have been waiting for Loving You Always since When You Were Mine. Granted it wasn't that long of a wait, but still a wait. So, the story continues with Cam, Kerris, and Walsh. Now if you had read my review for When You Were Mine, you would remember I wasn't too happy with the ending of that book, but still thought it was a good book. I knew going into the story that Kerris and Walsh were meant to be together, but how are they going to get together. *Spoiler if you didn't read When You Were Mine* For reals, because at the end of When You Were Mine Kerris was pregnant and planning to stay with Cam for the sake of the baby. So, we were left hanging. You could say I was frustrated.

I started Loving You Always frustrated, because the situation. The beginning is volatile, because Cam has trust issues with Kerris. Who can blame him? Seriously, he catches his best friend and wife kissing. So, the first half the book is rough. There is so much contention that you can cut it with a knife. It doesn't help that Cam decides to stay with Kerris every time they get in an argument throw what she did in her face. Here's my thought: if you decide to stay with someone you need to let it go cause it, and if you can't things need to end. What see is Cam and Kerris toxic relationship. However, tragedy strikes and Cam decides to leave. Yes, I'm leaving a lot out. Now Kerris needs to rebuild herself after everything she has been through and be willing to let Walsh into her heart.

Honestly, this was the story I needed after reading When You Were Mine, because Kennedy actually went over a lot of the thoughts I had about the first book. I like how she was able address some of my issues with Kerris. I really love how she went about the situation. It wasn't sugar-coated "Yay, I'm single now I can be the man I love." No, Kerris had to seriously work on her personal issues that she tried to stuff away when she married Cam. I love that fact that Kerris didn't jump into a relationship right away with Walsh, but she went through a year to regroup. Walsh was an eager beaver to get into a relationship with Kerris, but he was willing to respect her wishes. I enjoyed the fact that he got to get his feelings out on the table, because it needed to be done. I do have mixed feelings for Cam. Through Loving You Always he's a jerk, but I think in his own way he was trying to fix what the situation. After the tragedy, he found away to do it. Granted it probably wasn't the best way, but then I started to think how Kerris character was like. I think he was trying to save her from making a bigger mistake, even though it was a bit harsh.

Bottom line: Fantastic read! Emotionally I was all over. I was trying to figure out how Kennedy was going to get Kerris and Walsh together. Honestly, I didn't see what happen coming. I thought it was a little jacked up, but it was for growth of Kerris, Cam, and Walsh. This is one of the stories I could gush and tell every single detail. However, I'm going to stop before I do.

However, I cannot stress that you need to read When You Were Mine before starting Loving You Always, because it's starting pretty much where When You Were Mine left off. Now I want Cam's happy ever after. It's not going to be an easy road, because he still had a lot of pent up anger.

Copy provide by Forever Romance via NetGalley (I did purchase)

Please join us for the the read along for LOVING YOU ALWAYS on October 13th! Click here!
Amazon | B&N | iTunes | Goodreads

About Kennedy Ryan
Kennedy Ryan writes contemporary romance and women's fiction. She always give her characters their happily ever after, but loves to make them work for it! It's a long road to love, so sit back and enjoy the ride.  In an alternative universe and under her government issue name, Tina Dula, she is a wife to the love of her life, mom to a special, beautiful son, and a friend to those living with autism through her foundation Myles-A-Part, serving Georgia families.

Her writings on Autism have appeared in Chicken Soup for the Soul, and she has been featured on the Montel Williams Show, NPR, Headline News and others. Ryan is donating a portion of her proceeds to her own foundation and to her charitable partner, Talk About Curing Autism (TACA).

Her interview series MOMMIES DO THE MOST AMAZING THINGS is featured each month in Brooke Burke's online magazine Modern Mom.
a Rafflecopter giveaway
Posted by Melody May at 6:00 AM