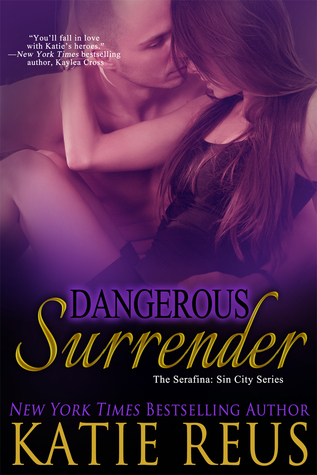 The twins are as different as night and day. While Logan seems to be the fun and carefree one, Roman is stoic and quiet. So, you're not sure how to think of him. Taylor Arenas isn't sure how she feels about Roman other than she can trust him, and Vadim vouches for him.

Anyway, Dangerous Surrender starts out with a bang, which sends Taylor fleeing for her life. She heads to Vegas, because that's where Vadim lives. However, she forgets that he's on his honeymoon, so she has to put her trust in Roman. Roman feels this protectiveness towards Taylor, but can't admit he likes her. So, it becomes a little awkward for like a minute. Fortunately everything works itself out between the two of them. So, that's the romance aspect of the story. You have the bad guy trying to get Taylor.

What I liked about the story was Taylor is a bit awkward and unsure of herself. A lot has to deal with she's pretty smart and that can intimidate guys. Then you have Roman who isn't like his brother and is a bit gun-shy thinking about getting into a relationship with Taylor. Gotta love a past relationship gone wrong. Anyway, I kind of wish I knew more about what happen, but I guess that wasn't pertinent information. Basically there is build towards the end and was a fairly quick read. Overall, not bad. Plus, you get see a side of Roman that you would never thought he had.