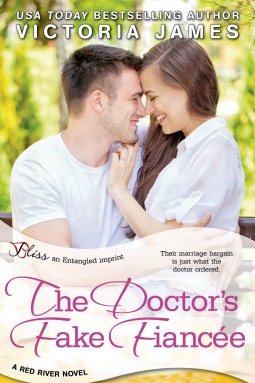 Before you even start Victoria James's The Doctor's Fake Fiancée, grab a box of tissues. I'm not kidding Victoria had me crying from the first couple of chapters. It did lighten up, but it might be a good idea to keep them near by. The ending did me in. Granted it was one of the sappiest endings, but it still got to me. However, this book is FANTASTIC! I absolutely loved this story even though I was crying through most of the book.

So, if you have read the previous Red River books you would remember at the end of The Best Man's Baby Evan Manning was in an accident that caused serious damage to his hand. This caused him to quit being a surgeon and the lost of his fiancée. Well, if the girl is going to leave after a tragedy, good riddance. Anyway, we didn't know exactly what happen to Evan's hand, so we were left wondering. Finally the answer was reveal. Evan is a hero.

All right, we have Evan who is trying to piece back together his life, and he's doing his mentor a favor by helping him out in Red River. Family Practice never held any appeal to Evan, so this is his time spent in hell. He's just biding his time.

Grace Matheson and her son Christopher have hit a couple of rough patches since the accident, but they manage to get up again. Grace wanted to thank Evan properly for saving her son and herself after the accident that had change his life.

Prior to the accident, Evan was pretty self-absorbed, and the sad thing was he didn't realize it until he got to know Grace. Now Grace is an open kind person, who has rotten luck in her life. A lot of my tears came from Grace's situation, but she's a fighter. She could have given up on life so many times or given up her child when her boyfriend left, but she didn't. She did everything she could for Chris. When hears about Grace's situation he kind of did a scummy thing and manipulate the situation so it would benefit his situation.

Evan slowly realizes there is more to life, but he almost let his ambition get in the way of real happiness. I love that Grace sticks up for herself when Evan was being a douche. It took Grace leaving him to realize that his life was hallow.

I absolutely love The Doctor's Fake Fiancée. I think this was even better than The Best Man's Baby, and I absolutely LOVED that story. This is an emotional roller coaster and a lot has to do with Grace's circumstances. While I was reading this story I tweeted that about sending my gut to Victoria cause it would have been easier to deal with than the gut punches.

This is my final thought: The Doctor's Fake Fiancée by Victoria James will tear you up. If not, you have a heart made of stone.