Her Secret Husband by Andrea Laurence 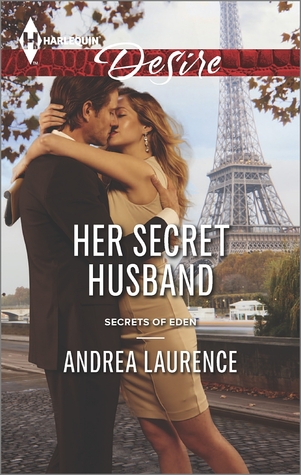 We finally have hit the conclusion of the Secrets of Eden series. I'm not going to lie, but Her Secret Husband was a little rough on the emotions. So, the series has been building to the grand reveal at the end. Everyone is trying to protect one another.

We finally have arrived to last of the Eden children, Julianne Eden and Heath Langston. Boy do they have a doozy of a secret. No one knows that Heath and Julianne secretly eloped 11 years. Heath has been trying to be understanding, but he's finally fed up and basically forces Julianne to decide whats going to happen next. Example:


"I think a part of you does. It might suck to be alone, but it's better than making yourself vulnerable and getting hurt. Trust me, I know what it's like to get your heart ripped out and stomped on. Being lonely doesn't come close to that kind of pain. I'm tired of you using me, Jules. Make a decision."


Part of the problem is Julianne is keeping a secret that has been locked up for 16 years which ties into the family secret.

So, you instantly feel bad for Heath cause he's been patient, and he's just tired. However, you get the feeling that there was more that happen to Julianne, but not quite sure. So, you're not sure to trust her even though she was a victim. Granted a lot of her issues would probably solve had she come forward with the secret sooner, but she was protecting everyone from the ugly truth.

Basically, you have to friends that were in love with one another, but the secret is tearing them apart cause a drift between them. Julianne and Heath still love one another, but until Julianne can fully open up to Heath they can never be. Throughout Her Secret Husband there are lot hurtful things said to one another, which stem from miscommunication and fear. Fear that Julianne is going to looked at differently; fear on how Heath is going to react when he finds out the truth. Emotionally this book is rough, but good. You see that both love one another, but fear is what pushes them apart. Yes, the tears will be building in the story, and by the end you will have the ugly happy cry. I love that Her Secret Husband brings the whole series together. This is one of those series you will have to read from book one cause each of the stories adds a little more to bring us to the grand conclusion. Andrea did a marvelous job bringing in a strong ending with everything working out.


"I see something between you two. I do not see it often. You have something rare and precious. You must treat your love like the most valuable thing you will ever own. Don't ever let it get away from you. You will regret it your entire life, I assure you."