What a Lady Most Desires by Lecia Cornwall (Review) 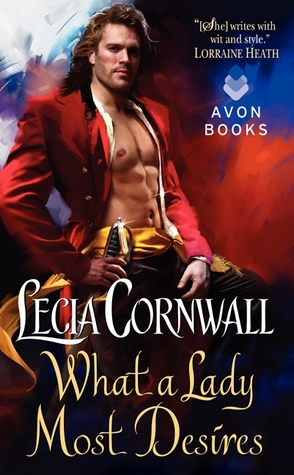 I got a chance to read What a Lady Most Desires by Lecia Cornwall. This is the third book in Temberlay series, and there are a few characters from the previous books. Of course, I haven't read those books yet. Fortunately, I wasn't lost or confused. However, it might have helped to have read the previous books, but I survive without reading them.

Anyway, the story starts out in Brussels right before the final battle against Napoleon at a ball. Lady Delphine St. James ends up dancing with Major Lord Stephen Ives. However, it's kind of begrudgingly, but he was rescuing her from Captain Lord Rothdale. When Stephen first met Delphine, he was taken by her charm, but that quickly sour when he saw as his vain social climbing lady. So, he steer clear of her. Now Delphine never understood why he couldn't stand her, after all she had thought him to the perfect man for her. Granted he couldn't never help her family aspiration, but that made him perfect for her. The battle ensue and chaos happens and Stephen is severely injured, almost to the point of death.
Delphine helps him recover and of course there is more to the story.

I liked What a Lady Most Desires cause it starts off in Brussels right before the final battle. Then we move on to battle field and Lecia paints a vivid picture of the chaos that is going on. Once it's over and soldiers are taken to make-shift-hospitals you see Delphine trying to help. When she finds Stephen takes on the duty to practically take care of him. Something a proper young lady should never do. I loved the deep affection she showed to Stephen when he was at his lowest point. She kind of pushed her way into his life, showed that she was more that shallow social climber he always envision her to be. I liked the trust that built between them. Another thing I liked about the story was there was a clear bad guy. Yes, he was identify right away, then he went into the background and you didn't see him till the end when everything came to light.

Overall, I thought What a Lady Most Desire was a pretty darn good book. Yes, there were some slow times during Stephen's recovery period. All in all, I found the story to pretty balance, and yes towards the end I was a little worry. But it all worked out, and I liked how it end. I liked that Delphine was able to finally able to make a choice on what she wanted.