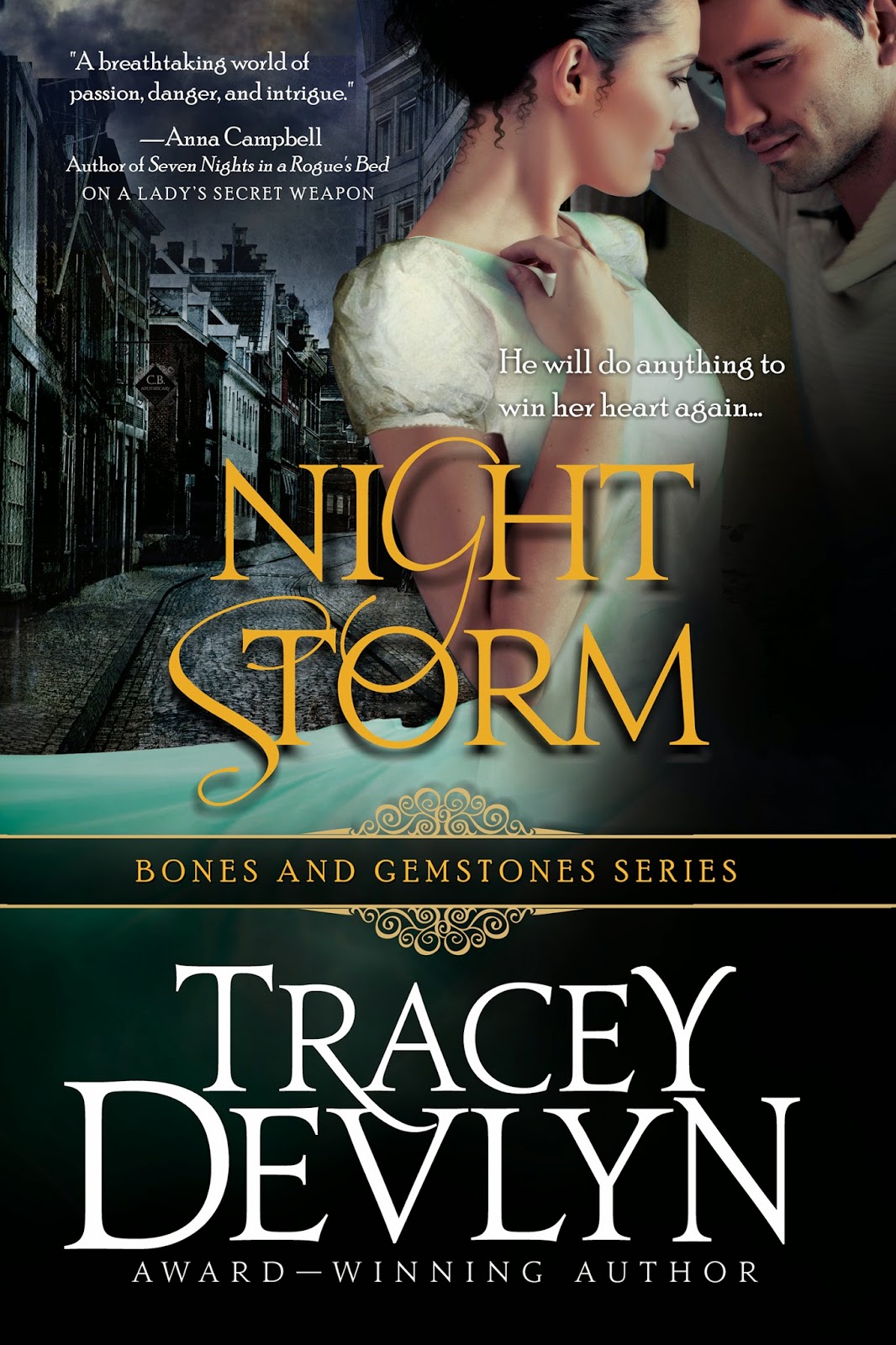 Book One, Bones and Gemstones series

A promising young apothecary picks up the pieces of her life, only to collide with the ruthless thief-taker who once shattered her dreams and her heart.

When the love of his life chose an apprenticeship in Scotland over his marriage proposal, thief-taker Cameron Adair buried himself in his work--building an unmatched network of underworld spies. Forged by his reputation as a ruthless, greed-driven businessman, he has amassed a fortune. But he has one vulnerable spot in his armor--a brilliant, green-eyed apothecary, who continues to haunt his heart. When a murder investigation brings him back into contact with Charlotte Fielding, Cameron sets aside the past to find a killer and to distract a headstrong apothecary, clue by clue, kiss by kiss.

My Thoughts:
Wow! Seriously, I'm truly impress with Night Storm. Honestly, I went in not knowing what I was going to find. I haven't read a lot of Tracey Devlyn's books, even though I have them. Anyway, we have a second chance lover story between Cameron Adair (Cam) and Charlotte Fielding (Charley). They had a falling out five years earlier. Charley always thought it was from Cam's pride.

"It's as fragile as a strand of cotton and as unbending as the finest steel. Pride's an inherent part of every man, young or old, and it governs their every action and every thought, good or bad. And it's the one place a woman can do the most destruction. In my experience, men need to be handle with the softest gloves."

However, there was more to their fall out that's told later in the story.

So, we have the rekindling of love, but that's not the main focus of the story. Actually it's murder of a prominent patroness of the Augusta Theater (Lady Winthrop). Basically, Charley finds herself embroil of a murder cause she wants to help Felix, after all he found the body. Cam was called in to help solve the murder even though he's a thief-taker. Anyway, Cam and Charley work together to solve the mystery behind the death of Lady Winthrop. One of the challenges they need to overcome is trust. After Cam broke Charley's heart, she lost her trust in him.

Overall, Night Storm was amazing. I love the fact that Tracey had you guessing on who the murder was, and I didn't guess who the real culprit was even when it was reveal. There we little twist that made you second guess the person was. I liked that it wasn't your typical story. Let me clarify. You have Charley who has a profession, an apothecary which wasn't a typical job for a woman and Cam who was below the poverty line to rise above. Not a typical regency setting, and it was done in a fabulous job. So, here is the bottom line: If you are looking for a book that's not your typical regency, you might want to try Night Storm.


"Because I know you." Confidence laced his words. "Secretiveness is not in your nature. You've been an open book from the first day I met you."
"Life has a way of closing the book, page by page. The naive young woman you used to know disappeared chapters ago."
His gaze traveled over her features with a thoroughness that left her breathless. A gaze that seemed to say, "No, she's still on the page. Tattered and dinged, but still there."

In the distance, Charlotte Fielding spotted the simple, white-lettered sign that marked her destination. Apothecary. The tension she’d been carrying in her shoulders since entering the Whitley residence loosened its biting grip. The strain between husband and wife had not lifted in her two-day absence. If anything, it had grown worse, now that Mr. Whitley felt well enough to defend himself.

Charlotte’s brisk pace slowed. A man was slumped on the pavement between her shop and the boarded-up bakery next door. He sat with one leg stretched out across the walkway, the other bent at an angle. The rim of his hat protected his face from identification. So, too, did the long black woolen coat and matching muffler around his neck.

The tension in Charlotte’s shoulders returned full force. Even though she could not identify him, she knew what he wasn’t—a beggar. Everything about him was too fine for him to be living in the streets. She glanced around, checking the evening shadows as best she could with only lamplight to aid her. Anderson’s lending library, Patterson’s coffee shop, Gertrude’s lace boutique, Tilly’s former bakery—they all stood silent and free of loitering troublemakers and customers. If she cried out for help, would the shopkeepers hear her from their snug, upstairs apartments?

She considered entering through the back of her building, an area normally reserved for deliveries, but she couldn’t bring herself to venture down the dank, narrow alleyway at this time of night. Drawing in a calming breath, she reached into her reticule and pulled out her pouch of pepper. A poor defense, she knew, but she always kept it, thinking it would give her a small chance of escape if thrown in an assailant’s face.

Increasing her pace, she stopped in front of her shop’s weathered door, the color of a cloud-streaked blue sky. The man remained motionless, silent. Eerily so. She experienced a moment of indecision. Should she nudge him? Could he be hurt and in need of assistance? Or should she continue on inside her own shop and mind her own business?

“Hello, Charley.” The voice was unmistakable.

A chill started at the base of her neck and swept through her body. Bone deep and breath stealing. With slow, precise movements, her gaze lowered to the source of the too-familiar voice. A voice that belonged to the only man who had ever called her Charley.

The man’s uplifted face revealed itself. Thick, bold eyebrows stood out on a pale, pain-filled face. A once-beloved face. Cameron Adair. What little air she had left disappeared at the sight of Cam—Cameron. Other than a brief glimpse of him a few months ago, she hadn’t seen him for years. But she would have known him anywhere. The shock of seeing him held her immobile, terrified in a way she hadn’t been since the early days of their falling out.

“Charley, I need your help.”

His words, laced with a strain born of hard-fought control, snapped her out of the past and plunged her back into the present. Cameron Adair was sprawled at her door, hurt, needing her help.

She slid her key into the lock. Metal scratched against metal until she heard a familiar click. Setting her bag inside the door, she returned outside. “Are you able to get to your feet?” She managed to keep her voice calm, unaffected. But inside, a violent tremor began and a maelstrom of questions flooded her mind. Why come to her? Where was he hurt? Why show up on her doorstep after complete and utter silence for five miserable years?

Carefully, she folded her hands at her waist and locked her knees before she could humiliate herself with senseless emotion. She had decided long ago to waste no more of it on Cameron Adair.

Something like disappointment flared in his blue, ice-chipped eyes. “Yes, with assistance.”

“Where are you hurt?”

“Let’s get you inside out of the cold, and I’ll hail a hansom cab to take you to Dr. Hollingsworth.”

He shook his head and mumbled, “I’ve been shot. Lost too much blood.”

“You must,” he interrupted. “I haven’t the strength to go elsewhere.”

She knew what it had cost him to admit to such weakness. And because she knew this about him, an unrivaled fear forced her to his side.

Positioning herself in a crouch, Charlotte took a steadying breath before sliding her arm around his broad back. Blood, sweat, and a masculine scent uniquely Cameron’s filled her nose. She gritted her teeth against an overwhelming desire to inhale deeply.

He nodded once, his full lips pressed into a thin, determined line. Bending forward, he wrapped an arm around her shoulder to brace himself. The new position put them face-to-face, breath-to-breath.

Also, for a limited time, Tracey will be giving away the first short story she ever published—HIS SECRET DESIRE—re-edited and re-packaged with a beautiful new cover. FREE for a LIMITED TIME at the following locations. 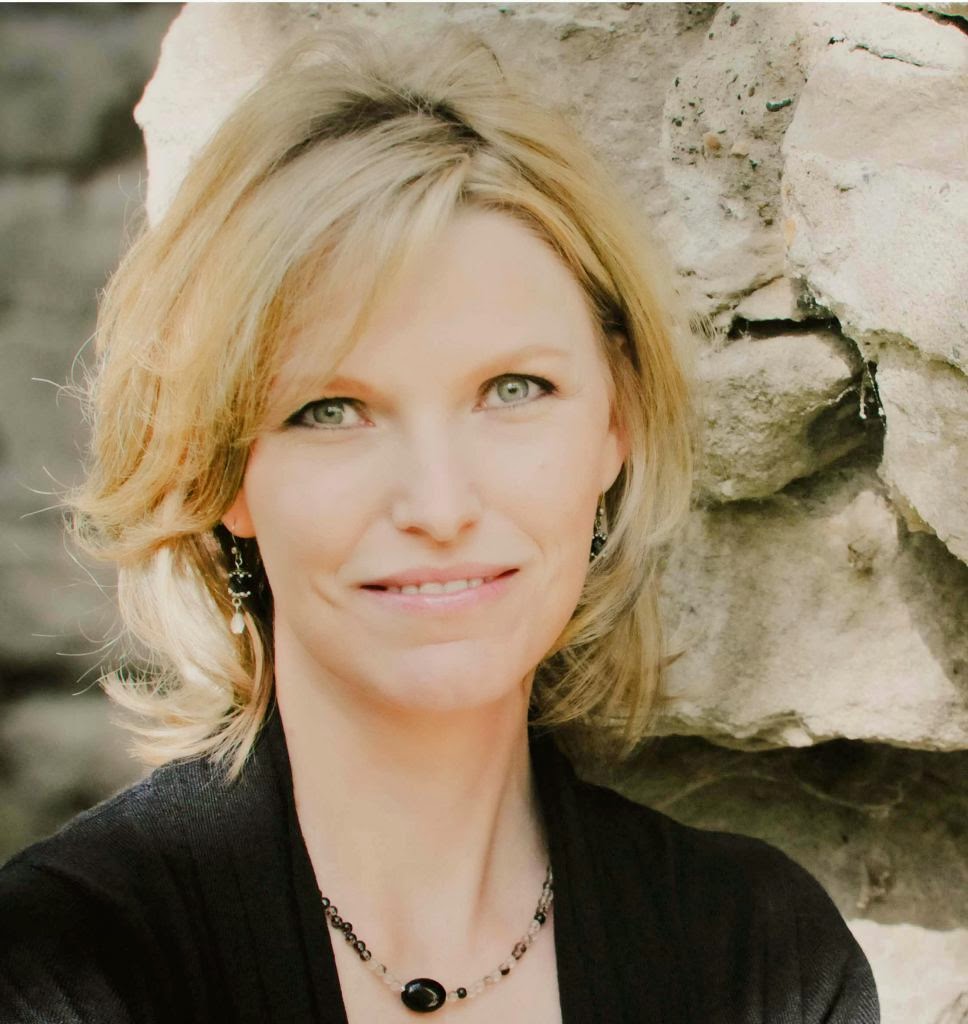 An Illinois native, Tracey spends her evenings harassing her once-in-a-lifetime husband and her weekends torturing her characters. For more information on Tracey, including her Internet haunts, contest updates, and details on her upcoming novels, please visit her website.

Connect with Tracey:
Website | Facebook | Twitter | Goodreads
Giveaway Info:
$25 gift card to any online bookstore of the winner's choice, plus a "Custom-made Sachet by Tracey" – Open for International Shipping

a Rafflecopter giveaway
Posted by Melody May at 7:39 AM