Single By Saturday by Catherine Bybee 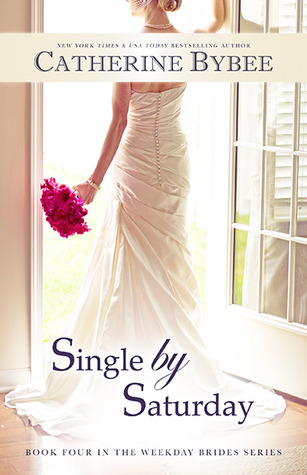 I'm a little late. Well, Single By Saturday by was HEA Book Club book of the month, and I just finished reading it yesterday. I know, I'm slacking. Oh well, at least I got it done, so half a point for me.

When I started Single By Saturday, I thought it was interesting to have Karen and Michael to have a fake marriage. Okay, that's not interesting, it was more like it was interesting to have Michael have a fake marriage cause he wanted to keep the facade that he was hot heterosexual male actor when he clearly wasn't. Everything seem to be going to plan until Michael's brother showed up and causing a catastrophe. I know that's a bit dramatic, but to Michael and Karen's world it was. After all the plan was for them to be together for a year, and the world would believe it was just another Hollywood marriage gone south. Now they need to go meet up with the rest of the family. This shouldn't be a problem, except Karen sort of has the hots for Zach (Michael's brother) and he returns the feelings. Oh goodness, the world got a bit complicated. There are other factors that cause issues in the story.

Honestly, it wasn't bad. Yeah, I did have a hard time believing Michael couldn't be an openly gay actor, but then I started to think of where he came from and it made sense to keep it a secret. I actually didn't have a problem with Karen and Zach's feelings. However, I liked how they tried to keep from crossing the lines until Michael and Karen's relationship was done. They wanted to respect Michael's feelings. At first, I thought it was interesting. Then it slowed a little, but started to pickup once Karen and Michael headed off to his parents house. Once there the story started to pickup that I had to finish reading the story. Overall, Single By Saturday was an okay read. I did enjoy the story. Some parts I enjoyed more than others and I'm curious enough to checkout other stories in the series.