Taste of Darkness by Katie Reus 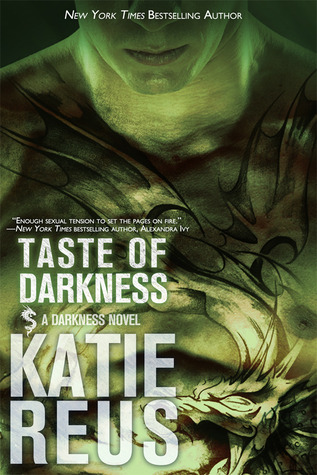 Last year I read Darkness Awakened, which launched her new series Darkness. All right, I was a little worry, because the first book didn't grab me. However, there was one character that intrigued. I didn't mention him my review last year, because I just did a general "I'm curious about a few characters in the next book" phrase. The character I was intrigued was Drake. Here's why: he's a dragon. If you don't know, dragons are awesome shifters. Anyway, Katie Reus brings us Drake's book in Taste of Darkness.

So, at the beginning of the story Drake is still getting accustom to life after being locked up in hell for centuries. He has a feeling he has found his mate in a wolf shifter, Victoria. Now Victoria has feelings for Drake, but doesn't know how he feels about her. Plus, she wants to make sure that Drake isn't just settling on her and vice versa. However, these two have chemistry. Seriously, Drake freaking glows when he's around Victoria.

Anyway, he eventually finds out he has siblings, doesn't trust them. More like he's not sure what to think of them cause his memory is a hit or miss. So, the Stavros clan isn't sure what to think of dragons being real. Anyway, they head up to where Drake's family is located and the story gets a little more interesting with more dragons. I'm going to be frank, I love this book. It's one of those stories I want to say every thought about this book and basically tell you the story.

I love how the story focuses on Drake and finding about himself and his people. You get see bits of Drake's memory coming back. I like one of his memory about what his father told him:


"You're from a strong line and you're naturally bigger than most of the other boys your age. Some males feel the need to prove themselves and want to start fights. It's a natural thing, but I'm glad you're not like that. True leaders know how to control themselves. They earn loyalty and respect by leading by example, not by bullying."

This shows what good character Drake has at even a young age. I love how he treats Victoria with respect. Most of the clan treats her like she's still a young cub, while Drake treats her as an equal. Although he's a bit overprotective at times.

I have to say that I love how you get a sense there's a bad guy lurking around in the story, but you don't know who. As the story progresses Katie gives you two guys who could be the bad guy. I love the fact you suspect one more than the other, because of his past action. All of the sudden you're like no way, you did not just do that to me. Fantastic.

Dragons are awesome! Katie won me over with Taste of Darkness, because I wasn't sure I was going to like the series after my mediocre feelings toward Darkness Awakened. Now I'm excited for the next story. I'm sure who I would want more for the next story Drake's brother or his sister. I'm kinda leaning towards his brother. My fingers are cross for that one.