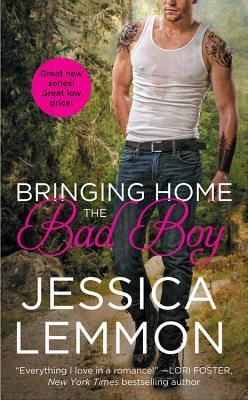 The Bad Boy Is Back
Evan Downey needs a new beginning. Since the death of his wife five years ago, the brilliant tattoo artist has shut himself away in a prison of grief that not even his work can break him out of-and what's worse, Evan knows his son Lyon is bearing the brunt of his seclusion. Moving back to the lake town of Evergreen Cove where he spent his childhood summers is his last chance for a fresh start.
Charlotte Harris knows she owes it to her best friend's memory to help Evan and his son find their way again, but she can't stop her traitorous heart from skipping a beat every time she looks into Evan's mesmerizing eyes. Charlotte is determined to stay strictly in the Friend Zone-until a mind-blowing night knocks that plan by the wayside. Now, if they're brave enough to let it, Charlotte and Evan might just find a love capable of healing their broken hearts . . .

First off, I know I won over TBQ with the tattoos. However, I love the whole cover. I think it's a fantastic cover with the background and Evan with his tattoos. It's drool worthy. I can't wait for this book cause I just want Evan to stop moping around. In the Love in the Balance books, you saw Evan pretty depress. By The Millionaire Affair Evan was starting to come out of his funk. He just seem so yummy, and I wanted more of him. So, I'm lusting for the story and the cover. Cause you can't have a mopey bad boy, it's just not right. So, what are you lusting for, a bad boy or something else?