Falling for the Pirate by Amber Lin 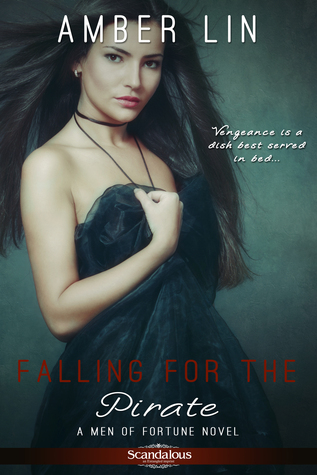 Argh there! Too bad this isn't a swashbuckling tale, but it's still a fabulous read from Amber Lin. Today I bring you a tale of revenge, captivity, amnesia, a pirate-like hero, and a young woman caught in the middle of this in Falling of the Pirate. Amber brings us the second story in Men of Fortune novels.

We meet are young heroine, Juliana Hargate, who wants to find proof that her father is innocent from wrong doing. However, she ends up getting caught by Nate Bowmen. Nate assumes that she's been sent by Hargate to weasel out information. Juliana gets scared and she ends up almost drowning. Fortunately, she survives, but she's unable to remember a thing. Of course, Nate thinks this is a scheme, and being a ruthless kind of guy he almost does some despicable things. I was a little worry he was going to rape Juliana, but I had nothing to worry.

Anyway, Juliana eventually gets her memory back. Now you are wondering where the revenge fits into the story. Well, Nate has this detail revenge plot against Juliana's father. First off, her father is not a nice man, and he did terrible things, especially to Nate. I completely understand why Nate would want to extract revenge on the man.

Falling for the Pirate is a captivating story with the revenge plot. I enjoyed the characters. You have Juliana who has been shelter from her father's deplorable behavior. In a way he did protector, but at the same time let her down. It was painful to see what his actions had done to her. Nate a ruthless man so set on revenge (probably the only pirate-like attribute in the story), but realizes the damage it does to those around. Eventually he realizes that it's not as satisfying as he thought it would be. Overall, a pretty good read. Even though the story is a book two, you can read this story without worrying about missing something from the first story. So, if you are looking for a tale, you might be interested in Falling for the Pirate.