Holiday Ever After: One Snowy Night/ Holiday Wishes/Mistletoe in Paradise by Jill Shalvis 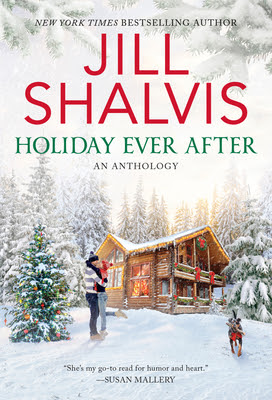 Holiday Ever After is a combination of novellas that Jill Shalvis wrote for a couple of her series. One Snowy Night and Holiday Wishes fit in the world of Heartbreaker Bay, and Mistletoe in Paradise fits in Wildstone books. I actually read One Snowy Night and Holiday Wishes when they released. However, I hadn't had a chance to read Mistletoe in Paradise. So lets dive into the stories.
One Snowy Night
Heartbreaker Bay 2.5
Now if you haven't read my original review of One Snowy Night, lucky for you I have it right here:
We actually got to see a lot of Rory in The Trouble with Mistletoe and if you haven't read it you have to see why Rory is reluctant to go home for Christmas. Even then it doesn't give a lot, but Rory left home and Willa took her under her wing. There is a lot jam packed into this novella, which could have been a little longer, but that is beside the point. Anyway, Max and Rory have been skirting around feelings, but there is a past issue. Poor Rory, life has been a little rough for her. The gist of things Max kind of holds a grudge, but conflicted with the idea of liking Rory.

Bottom line: Cute quick holiday read, and fills in the missing pieces of what happen with Max and Rory on the way home for Christmas.
Rating: 4 Stars

Holiday Wishes
Heartbreaker Bay 4.5
Another one I read. Who doesn't love a story that has couples stranded in a snow storm. Original review:
Gotta love the holiday time in Heartbreaker Bay. However, this time we aren't anywhere near the magic fountain. The gang finds themselves stranded at a B&B. No problem. Hahaha! Sean comes face to face with a blast from the past. Okay, Sean and Lotti use to be a thing in high school, but Sean was stupid and let the best thing get away. Now he's trying to make up for what he did when he was young and stupid. Lotti can't forget Sean, but she wants him to stay in the past, after all he broke her heart. There always seem to be magic in the air whenever true loves comes knocking on the door. Poor Sean he has to prove to Lotti that he's a change man.

We have met Sean in the previous books, I mean he's Finn's brother. However, he's in the background. Now he gets his chance to shine and find love. Jill brings out another sweet quick romance that tides you over until the next Heartbreaker Bay books comes out. Sean and Lotti are cute and sweet, but Lotti is hesitant. I mean who wants to get burn twice in one life. So, if you are in need of another sweet, cute read that centers around the holidays, Holiday Wishes might be want you need.
Rating: 4 Stars
These two little novellas fit into a series, and I stand by that you should read the previous books in the series. However, that is a suggestion.

Mistletoe in Paradise
Wildstone 5.5
In Mistletoe in Paradise we meet up with Hannah and James. Now these crazy two have a past. However, they were torn apart due tragedy. They weren't planning to see one another forever. The lack of communication usually the death of most relationships.
The story was okay, because I was trying to figure out how this was tied to the Wildstone books. I don't remember Hannah from the previous books. If she was in the books she's a super minor character. Anyway, she gets a story that is cute and has reconnections from someone from the past. It's basically a quick filler story when it was written. It filled in the time till the next book in the series. Now do you have to read the previous books to get the gist of this story no. It can be a standalone novella. This story could have been a little longer.
Rating: 3.5 Stars
In Holiday Ever After you get three novellas in from two series that focus on Christmas. It's a way to put you in the holiday mood. I enjoyed majority of the book. This also can give you a taste of a series that you haven't tried yet if you not sure if you want to commit. The first two stories are slightly intricate to the series, but they can be still read as a standalone.
Copy provide by Avon via Netgalley
Overall Rating: 4 Stars