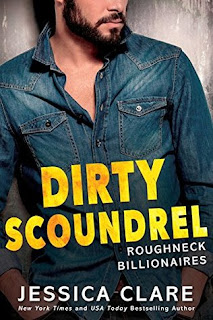 Totally loved the cover of Dirty Scoundrel, and I also heard good things about this story, so it was a heck yeah. I didn't know what I was getting into when I started to read. All I heard was the hero was a bit of a jerk. Okay, I have a weakness for jerky heroes that redeem themselves by the end.

Okay, Clay Price is a real jerk at the beginning, but you know what I can understand where he was coming from. Deep down he wasn't an a-hole hero. I don't think he knows how to be one. Anyway, he went into Natalie Weston's home turf to show her who was boss and give her what she was missing, and leave. Yes, that sounds really bad. His intentions are pretty awful, but deep down he's a good guy, just a dumbass for a bit.

Natalie is pretty sweet, and still the same person, but has falling on hard times. She can't refuse Clay's indecent proposal, because it would give her the stability she hasn't had in years.

I liked Dirty Scoundrel, because both Natalie and Clay feel that they are the injured party, and technically they are due to someone else's machinations. They don't realize at the time. However, they both needed to grow and mature. I like how they eventually figure out what the heck happen and where their love went wrong. I like this second chance revenge love story. Yes, Clay went into planning to be dick, and prove he doesn't need Natalie. Natalie is a victim during this story. I felt so bad for her, she was a pawn. Fortunately, everything works out, and all the wrongs are rectify. Overall, Dirty Scoundrel was a pretty good read, and there are some heartbreaking moments. However, a satisfying read. I can't wait for more in this series.