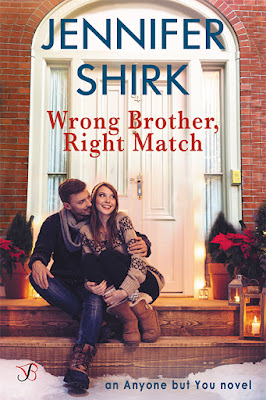 Matchmaking guru Kennedy Pepperdine’s life is perfect. Perfect job. Perfect friends. Perfect boyfriend. Except...when she gets trapped in an elevator with a handsome stranger, she accidentally confesses a secret: maybe her perfect boyfriend, Justin, isn’t so perfect for her after all. But a matchmaker should be able to successfully match herself, right? Thankfully, she’ll never see the handsome stranger again. Until she heads home with Justin for the holidays and learns that the sexy stranger is none other than Justin’s older brother, Matt.

Matt Ellis is trying to be on his best behavior for his mother—it is Christmas, after all. But when he recognizes the beautiful woman from the elevator—the one he hasn’t been able to stop thinking about for months—his best behavior is being held by a thread. Matt’s always sacrificed for his family, and nothing is more important than their happiness, but the more time he spends around Kennedy, the more he wonders if her supposed "right match" might just be the wrong brother.


Matt looked at his sister. “What do you think?”
“We can let her in on the secret,” Caitlyn said with a huge grin. “She’s definitely one of us.”
Matt hesitated. “Okay. The truth is…we all hate the fruitcake.”
“I knew it!” she exclaimed then frowned. “But I don’t understand. Why pretend to like it, then?”
“Honestly? Because none of us has the heart to tell her the truth. It makes her so happy. She’s one of the two percent who actually enjoys it.”
“And your dad,” she added. “He liked it, too. Your mom said so.”
Matt shook his head gravely. “No, he hated it the most.”
Kennedy blinked then looked to Caitlyn. “He did?”
“Yup.” Caitlyn shrugged. “Like Matt said, we didn’t have the heart to make her feel bad on Christmas. At least this time she didn’t put any figs or dried pineapple in it. That was a particularly bad year. Although Justin tolerated it the best out of all of us.”
Kennedy cracked a smile. “So your mom goes through all this trouble of making a fruitcake every Christmas and she’s the only one who eats it?”
“Oh, no,” Matt assured her. “We’ll all choke down a slice. You, too, since you’ll soon be part of the family. And we’ll all tell her how great it is. It’s tradition.”
“Tradition,” Caitlyn echoed firmly.
Kennedy laughed. Oh my, if she didn’t already love this family, this aspect of it only endeared them to her more. “Well, your secret is safe with me. I love traditions myself.”
“That’s good,” Caitlyn said, cracking herself up, “because you and Matt are standing under the mistletoe.”
What?!
Kennedy cautiously looked up as if to find the Sword of Damocles dangling over her, but instead found a small green ball of mistletoe tied up with ribbon. Crap! Her gaze dropped to Matt, who held a gleam of interest in his eyes, and her cheeks caught fire.
“Oh, well, that’s a silly tradition,” she said hurriedly, “I mean, we don’t have to do that.” Do we?
Barbara walked back into the room. “What don’t you have to do?”
Caitlyn pointed to the ball. “Matt and Kennedy are under the mistletoe.”
“Oh, how nice,” Barbara said, clasping her hands. “Kiss her, Matt. It’s Christmas after all.”
Matt glanced at Kennedy and stiffened, but without further argument leaned in to her. Her heart fluttered like a hummingbird in anticipation. She caught the pleasant scent of pine and soap on his skin as he brushed his lips against her cheek, hovering for just a few brief seconds before he was once again at a safe distance from her. Such a simple kiss, yet her emotions whirled and skidded.
“I’d better get going,” Matt murmured, backing into the door.
His mom frowned. “Are you okay, dear? Maybe you should sit down a bit first.”
“No, I need to get kissing—er, going. I need to go.” His gaze reluctantly returned to hers, and his voice dipped. “I’ll see you tomorrow night?”
She nodded, not trusting her voice. Then he was out the door as if suddenly spooked.
Unfortunately, she knew exactly how he felt. 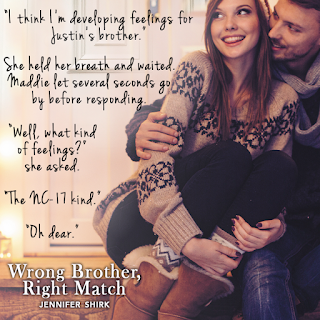 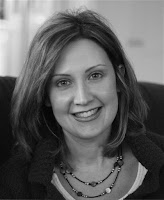 Author Info
Jennifer Shirk has a bachelor degree in pharmacy-which has in NO WAY at all helped her with her writing career. But she likes to point it out, since it shows romantic-at-hearts come in all shapes, sizes, and mind-numbing educations.

She writes sweet (and sometimes even funny) romances for Samhain Publishing, Avalon Books/Montlake Romance and now Entangled Publishing. She won third place in the RWA 2006 NYC's Kathryn Hayes Love and Laughter Contest with her first book, THE ROLE OF A LIFETIME. Recently, her novel SUNNY DAYS FOR SAM won the 2013 Golden Quill Published Authors Contest for Best Traditional Romance.

Lately she's been on a serious exercise kick. But don't hold that against her. 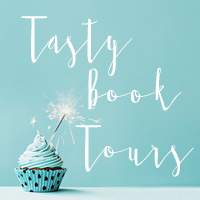 http://www.tastybooktours.com/2016/10/wrong-brother-right-match-anyone-but.html
Posted by Melody May at 8:07 AM