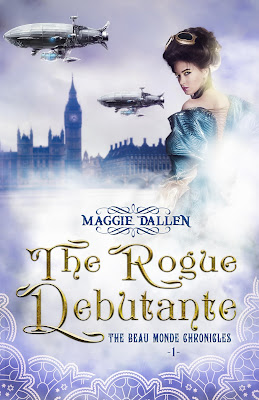 A rebellion is brewing and everyone must pick a side....even pirates and debutantes.

Delia Langley has been a prisoner all her life - a prisoner to high society and its conventions. A prisoner to her wealthy father's overprotective measures. A prisoner to a fiance-to-be in an arrangement made by her father to have a royal heir. In fact, the only time in her life that Delia ever felt free was when she was captured by the much-feared pirate Blackheart and his crew, and held for months while her father negotiated her ransom.

Now nineteen, the beautiful Delia is ready to leave another prison, the manmade "city in the sky," Beau Monde, where she's been tucked away, high above London all these many years. The plan is that after her debutante ball, her marriage to Lord Thaddeus Templeton will be announced, and the wheels will be set in motion for Delia to take her place as a proper society lady. Except she has other plans. Frustrated by the greed of the rich and the plight of the poor who live in the Shadowlands, a ghetto cast in darkness by the floating city of wealth above, Delia has been masquerading as Madame X, a French pirate, who has arranged to purchase her own pirate airship from the mysterious "Professor." Then there's Nicholas Crawley, the dashing, bachelor son of the family who have opened their home to Delia for her London visit. He's ruggedly handsome - and he's impossible. She doesn't expect to fall for him, but there's no denying the electricity that surges between them. A future with him would ruin everything, but her attraction to him is only one of many surprises poised to thwart her pirating plans in this charming steampunk tale.


My Thoughts: I enjoyed The Rogue Debutante. I thought it was a pretty good story even though it was a quick read. Do I wish it was a little longer; of course. Do I wish there was a prologue about Delia's time with the pirates; most definitely. Will I survive picking up where we meet Delia and how she's about to enter her season; yes.

So, we meet Delia who is has been kept in a gilded cage ever since her release of the pirates. However, she felt more trapped being in her father's home than with pirates. Now that she's 19, she plans to make her escape. Delia has a carefully laid plan, but she never expected to find someone that might entice her. Now we meet Nicholas Crawley, and his father is friends with Delia's father. His father has agreed to keep an eye on Delia while she's making her debut season. Anyway, both of them are living a double life and neither truly knows about the each others lives. However, they are smitten by one another.

Like I said quick read and I wish it was a little longer. There are time where it could have been dragged out a little more. However, The Rogue Debutante gives a glimpse of what is going on in London. Yes, there is unrest between the two classes: the rich and the poor. It kind of reminds me of the French Revolution in some aspects where you see the poor disgusted by the wealth and wanting to even out the playing field. It seems like that it's starting to brew. It makes me wonder what is going to happen in the story. I wonder if we will see Nicholas and Delia again or will they sail off into the sky. The Rogue Debutante has a great start to a series and leads you to wonder what will happen. It's kind of like a tease in a way. Granted Nicholas and Delia end up together, but it leaves you to wonder what will happen to the pirate and her friend. Basically, a good intro to Beau Monde Chronicles now I have to wait.

The spires of London grew in the distance as Delia hurtled through the air, her petticoats and skirts flapping in the wind. Delia opened her mouth to scream but her cry was drowned out by the sound of air rushing past as she tumbled toward the earth.

A rough grip on her arm brought her to a sudden and painful stop. Her shoulder shrieked in agony as she dangled in midair. She latched onto the rope that swung in front of her face, but whoever was holding on to her arm didn't loosen his hold. She looked up to see who was keeping her from a grim and grotesque death.

She could only see her savior's dark form; his face was hidden in the shadow cast by the airship hovering overhead. She felt the rope hoisting her toward the vessel and she resisted the urge to look down. When at last she reached the airship, a strong hand reached out to help her overboard, and she was finally able to see the face of her rescuer.

Maggie Dallen is a big city girl living in Montana. She writes adult and young adult romantic comedies in a range of genres. An unapologetic addict of all things romance, she loves to connect with fellow avid readers on Facebook, Twitter or at www.maggiedallen.com.