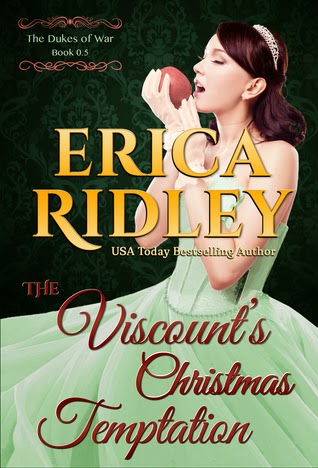 Yesterday, I felt like I needed a quick read and something a little lighter. I'm glad to say that I have found with Erica Ridley's The Viscount's Christmas Temptation. Let me just say that this story was kind of fun. Cause you have Lady Amelia Pembroke who is the sister of the Duke of Ravenwood. Now she's describe in the book as a managing sort of person. However, I think of it more like Type A to the extreme. She also has other quirks I'm not going to go into. Anyway, she has decided she wants to find a husband and decides to find one at the Sheffield Seventy-Fifth Annual Christmas Eve Ball. One problem: Sheffield has decided to cancel cause of the ballroom was damage. Being the managing sort of person Amelia has decided to rectified the situation with her solution.

Now Lord Benedict Sheffield is a man who likes to keep a schedule. From 8am to 8pm is set aside for straight work. After work he likes to let loose with his rakish tendency. So, when Amelia disturbs his peace he's a bit intrigued by the woman and her proposition.

So, we have two meticulous people hanging out. Amelia is the managing sort of gal, but doesn't know how to have fun. Actually fun isn't really in her vocabulary. Sheffield who likes to keep a tight ship does know how to have fun. While Amelia and himself are gallivanting London to find a suitable place to hold the Christmas Ball, Sheffield realizes he's willing to alter his schedule for his woman. Honestly, The Viscount's Christmas Temptation is a cute story. The worst thing that happens in the story is a stolen kiss, so it's pretty clean. Its the interaction between Amelia and Sheffield that makes the story come to life. So, if you are looking for a little fun for the holiday you might consider The Viscount's Christmas Temptation.