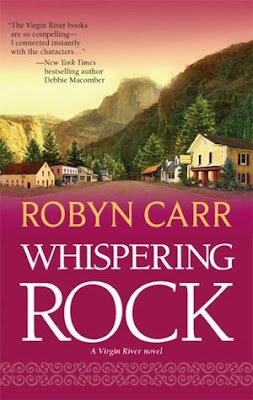 A few weeks back I listened to Whispering Rock by Robyn Carr. As you can see I have decided to continue on the series. In previous books we met Jack's sister Brie Sheridan, and we learn that she was a prosecutor. She was working on a major case and it didn't pan out, and the guy walked. The guy takes his revenge on Brie and goes on the run. Brie is having a rough year. Another person is having a rough year is Mike Valenzuela. He is too recovering, and him and Brie bond this book. You know who has a problem with this Jack. Those meddlesome older brothers.
In Whispering Rock we still have that small town living where everybody knows your business. Okay it's not that bad, its mainly Jack who meddles in his sister's love life. Not only that we have a new family move into the area, which sets up scene for future books. We have tragedy, and heartbreak with one of the new members to the town. This story touches on death, and rape. Brie has to overcome some fear. Mike has to overcome his challenges. In the process they solve possible bigger problem in the area that has to deal with date rape drugs. A lot happens in this story, and a good majority of the story is intertwine with what's going on in the town.
Overall, Whispering Rock was a pretty good listen. I enjoyed the story of Brie and Mike's budding romance. Their is another budding romance in the story too.
Copy provided by local library
Rating: 4 Stars
Posted by Melody May at 6:10 AM