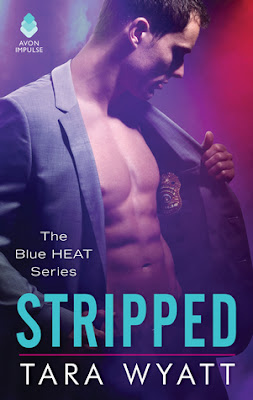 So, I had a chance to finished Stripped by Tara Wyatt. It had a Magic Mike kind of vibe, but with a better plot line. We aren't even going to my thoughts on Magic Mike, but I did liked Stripped. Plus, I'm looking forward to other books in the series.

In The Blue Heat series we basically have these top notch detectives that go undercover to get the bad guys. Makes me think of Law and Order: SVU or Criminal Intent, anyway. However, one of there guys died and the team is dealing with the aftermath. However, they are going to get the bad guy. Which leads us to Sawyer Matthews who wants to get out of his headspace for a night and ends up hooking up with Brooke Simmons who has bad luck with men. Only later to find out that Sawyer is her new partner. To say they had a rough working relationship at first would be an understatement. Yet, they eventually find there groove at work and off the clock.

Like I said we have Sawyer and Brooke, and they are super hot when they finally get together. Seriously, some of the that sexual tension is pretty intense. That alone would make you need a cold shower. At the beginning of the story Sawyer is pretty intense and a dick. Some of the things he does in the story makes you want to slap him. Fortunately, he does get his head out of his ass. Brooke is pretty much kickass kind of girl. She works hard to get where she is today. I admire her for most of the story. It wasn't until the end I wanted to smack the girl, for being a girl. I get why she was so pissed, but I still wanted to smack her.

Basically, Stripped was a much better read than watching Magic Mike. Seriously, the plot is SOOOO much better. If you liked watching Magic Mike then you might enjoyed Stripped, because it had a better plot. Plus, who doesn't love a good cop romance with one of the detectives who goes into an assignment as a stripper. Plus, it's a hot read, if you are looking for a little steam. The beginning is a little slow, but story does progress. Like I said I'm looking forward to more in the series. The next one goes undercover at a school. Fun times there.