No Getting Over A Cowboy by Delores Fossen (Review) 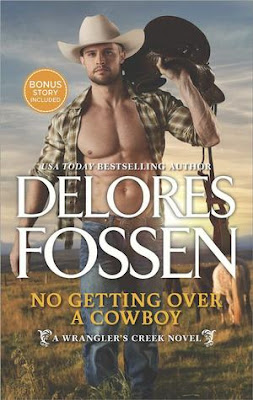 What made me want to read No Getting Over a Cowboy: 1) The author. I haven't read all her books, but the ones I have they have been GOOOOOD. 2) The Cover. I was tempted to lick the cover. He's a mighty fine guy. 3) Liked the first book and thought hey I might need to read the next book. By the way, I have to read the third book. Seriously, I need the Roman's story. NEED!

Anyway, we are getting a closer look at Garrett Granger. He's the nice Granger, but life has dealt him some crappy blows. Let's recap what happen in Those Texas Nights, because he's in there. His father dies, his wife and him are not on good terms, wife cheats on him and is caught on film, now he's trying to pick up the pieces of his life. Then Nicky Marlow nee Henderson comes into his life. Now these two have a history, not only that she has some major baggage. You thought that Garrett had problems, they don't come pair to Nicky.

Basically, Nicky has formed a widows group and trying to make a retreat so they can grow and heal. What she has planned doesn't go according as plan, and brings a slew of issues.This was a fantastic story. We have Nicky and Garrett rekindling a romance, Nicky trying to fix herself while trying to keep secrets hidden. There are some pretty good secrets that aren't revealed until the end. Seriously, No Getting Over a Cowboy was a mighty fine read. I'm honestly glad Garrett's ex-wife didn't cause too much of trouble, she tried; however, she was squash like a bug. Towards the end it does get a little crazy, but in a good way. I definitely enjoyed the story. I did chuckle at parts, and got a little choked up, so worth the time. If you are in the mood to tangle with a cowboy, you might want to give No Getting Over a Cowboy a try. I can't wait for Roman's story.

If this sounds like your kind of read you might try your luck on winning the a copy. The odds are pretty good. However, there is only a couple more days left https://sillymelody.blogspot.com/2017/04/tlc-book-tours-spotlight-giveaway-no.html.
Posted by Melody May at 8:51 AM