The Last Cowboy in Texas
Deep in the Heart of Texas #7
by Katie Lane
Forever Romance
December 16, 2014 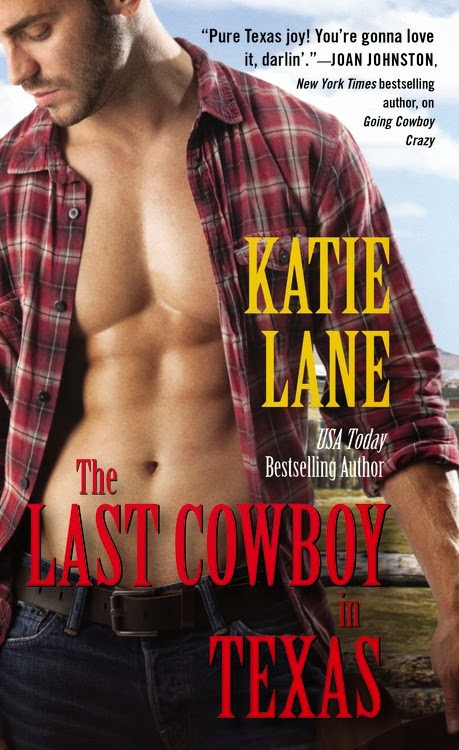 About The Last Cowboy in Texas, book 7 in Katie Lane’s Deep in the Heart of Texas series

Country music princess Starlet Brubaker has a sweet tooth for moon pies and cowboys: both are yummy-and you can never have just one. Now Beckett Cates may not be a cowboy, but he certainly has the heart, soul-and body-to whet her appetite. He's a sexy ex-Marine with a touch hotter than the scorching Texas sun and arms strong enough to catch her when she lands into trouble.

Playing bodyguard to America's sweetheart isn't easy for Beckett. But falling for her sure is. Unfortunately, Starlet has a reputation for keeping a guy or two wrapped around her finger and Beckett refuses to be anybody's backup. So now it's up to Starlet to prove that she's put her cowboy-crazy days behind her. Otherwise, she'll be singing solo instead of living in harmony with the man who's loved her even before her fame and fortune.

When I started The Last Cowboy in Texas, I wasn't sure if I was going to like the story. It all boils down to Starlet. At the beginning of the story she's the country music princess, and she wore it like armor. From the previous books she changed her image to the point that she didn't recognize herself. She made it hard to like the new image she was portraying, and I kind of felt the same way as Beckett. Beckett saw her has a spoil brat. She doesn't help her case in the story. Seriously, some of the things she did were horrible. It wasn't until I got more in the book that I realize that she was lost and didn't know how to find herself. Now Beckett, is the youngest Cates brothers, and he wasn't like the others. So, when he went off to the marines he change, and he wasn't the same guy when he left Bramble.

During the story, you see Starlet and Beckett basically taking one another's head-off. You know how sometimes when you can't stand one person, but it's actual the opposite. It's more like they don't know how to handle their feelings for one another, so it comes off as dislike. We see a lot of that throughout the story, and we can't forget the craziness that happens in Bramble.  Overall, I did like The Last Cowboy in Texas, because you have a love-hate relationship between Beckett and Starlet. However, Starlet almost ruins it with stupidity (that's the best way to describe it), and Beckett's hurt feelings almost get in the way. I guess I can't really sum up my feelings other than I liked the story.


Short Excerpt from The Last Cowboy in Texas:

With her head tucked under his chin, Beckett could feel Starlet take an uneven breath and release it before lifting her head and smiling brightly for the cameras.
“I’m glad y’all are so concerned,” she said.  “But as you can see, I’m just fine and dandy.  Thanks to the heroics of this Marine.”
That prompted a flood of questions and pictures, but it was Kari Jennings who raised her voice loud enough to be heard over the din.
“Why don’t you give your hero a thank you kiss, Star?”
The photographers catcalled their agreement.  Before Beckett could dissuade her from the notion, Starlet’s arms tightened around his neck, and he was pulled toward a pair of lips with a tiny mole at the corner that he remembered all too well.  The soft, full lips had barely brushed his when her eyes flashed open, and he found himself staring into a startled pair of green contacts.
The one word that slipped out of her mouth was the one word that Beckett had hoped he would never hear again.
“Becky?”

About Katie Lane
Katie Lane is the USA Today bestselling author of the Deep in the Heart of Texas and Hunk for the Holiday series.  Katie lives in Albuquerque, New Mexico, and when she isn't writing, enjoys reading, going to the gym, golfing, traveling, or just snuggling next to her high school sweetheart and cairn terrier Roo.