Hey everyone I would like to turn What I'm Reading over to Jenn LeBlanc and she's going to share some fun info about #Twitchy. I guess I better turn it over to her now.

Hey y'all!! I was going to come do a post here, talk about #Twitchy and the cover redesign, but it's a long boring story dealing with audience, numbers, math and analytics. Yuck. I love the new cover, I think it's beautiful and it speaks to how very alone Amelia feels even when in a crowded ballroom surrounded by people.
Alone.
I then decided a playlist in order... but there's really only one song that spoke to me while I was writing #twitchy.
This one:

It's Secrets by One Republic, and it was Amelia's theme.

I shouldn't leave you so easily.

This is Hugh's theme song:

and this is Charles's theme song:

To Make You Feel My Love... the Adele version.
That's it, those are the theme songs from Twitchy.
*hugs*
Jenn

Wasn't that awesome of Jenn to share some of the songs that inspired her for Absolute Surrender aka #Twitchy. 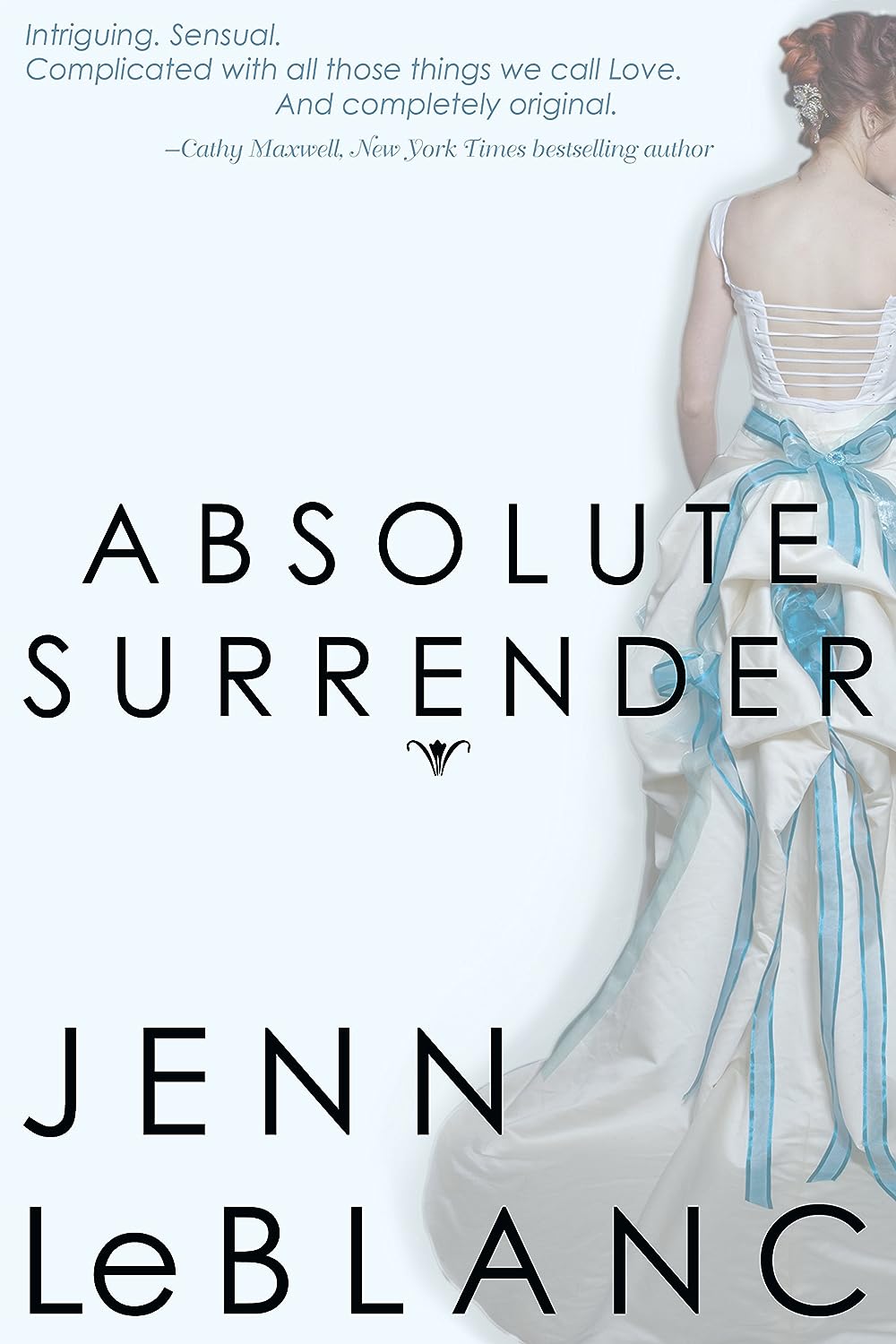 About ABSOLUTE SURRENDER:
Happiness was always too much for Lady Amelia to hope for. Now all she expects is to secure her future and marry Charles, Duke of Castleberry, as arranged. But Amelia has a dangerous secret that could not only destroy her in Charles's eyes and the eyes of society, but could also very well condemn her to Bedlam.

Baron Endsleigh, Amelia’s oldest friend, has other ideas. Ender has loved Amelia all his life. He knows her secrets, and they don’t frighten him. He plans to come between Amelia and Charles in any way he can to prevent the marriage and finally claim Amelia for his own. Though her father forbade the match years ago, Ender is determined to have her as his wife and nothing can stop him. Not even a duke as powerful as Castleberry.

That duke has hated Baron Endsleigh and wanted Amelia for, what seems to him, forever. Charles will stop at nothing to make her his, and his alone, even if that means destroying the one thing he knows she loves most in this world—Endsleigh.

Will Amelia be able to choose when one man speaks to her head and the other her heart?

None of them will find happiness until they all three learn to embrace absolute surrender.

Meet Jenn:
Colorado. Canon. Curls. CJs. Chuck Norris.
Born and raised in this beautiful state —very nearly with a camera in hand— I never left. I started my own family, got used to the curls, went to college, built a CJ, started a business, and totally beat the daylights out of Chuck Norris, all with a camera in hand.
Spending my days in parenting chat rooms I got highly adept with one-handed typing and I can still type just about as fast with one hand as I can with two. It’s a great talent to have when engrossed in a scene and in need of a hit of caffeine.
Once I finished my first novel I quickly realized: I was born a photographer.
From the realization that someone ELSE would be shooting the cover of MY book my control-freak took over. What started as an easy cover shoot ballooned into this ground-breaking new kind of media, designed specifically for digital book readers. The Illustrated Romance.
I live and thrive off chaos and the constant flow of the creative process. I wear shorts and flip-flops year-round —much to the chagrin of my friends and family.
The images from my book started a ruckus, and from there, #StudioSmexy was born, I’ve since shot over 1,000 romance novel covers, and currently shoot custom images for very special clients.

My second novel ABSOLUTE SURRENDER  did its own Chuck Norris impersonation with the charts on Amazon. You can find me on Twitter, Facebook and Instagram sharing eye candy (NSFW) and being a total rock star.

GIVEAWAY DETAILS:
Jenn is giving away an ebook copy of ABSOLUTE SURRENDER to one randomly chosen commenter (International). Another commenter will receive a set of Absolute Surrender paperdolls (US/CA).

So, what do you guys think of the songs or the cover? If you want a chance to win leave your comment with an email to contact you.
Posted by Melody May at 1:00 AM