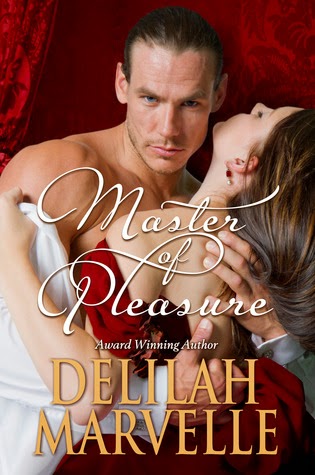 When I was reading Delilah Marvelle's Master of Pleasure the phrase kept popping into my head:


"Life is like a coin. Pleasure and pain are the two sides. Only one side is visible at a time. But the other side is waiting for it's turn."

So, pleasure and pain a lot in the story. However, Malcolm finds a it challenging to find a balance. He loves pain. He loves inflicting it, but enjoys receiving it. Yet, he was fearful to show his true nature and figure no woman completely understand what he wants. In the long run he thought it was best to avoid women. Plus he thought:


"Sex only turns people into mouth-foaming lunatics. Which he wasn't."

Yes, sometimes it does have that effect, but when the right person it can be a beautiful thing. Of course, Malcolm never completely understands that until he finds love.
Now Leona was interesting character. She's a single mother raising her son who is smart as a whip for his age. She's willing to do anything for her son, and she sacrifices her needs for him. I kind of felt bad for her, because she just didn't see her worth. I mean her fiancee didn't want her cause she was good enough to be in society. So, he dumps he and marries another. It kind of makes me think of Mr. Elton in Emma. Anyway, she feels pretty low about herself, and when Malcolm and her start to work things out they have a few complications. One of the major one is his perchance for pain, and his reluctance to share that with her.

All right. I likedMaster of Pleasure, but it just didn't wow me. I don't know what I was looking for. When I started the story I was a little worry, because the prologue is a bit rough. I wasn't sure I was going to get through with it. However, I manage. Once I hit the main meat of the story it did get better. The interaction between Malcolm and Leona was interesting. However, I didn't feel like they really connected, because he was just so hanged up with keeping his dark secret inside and Leona was trying to understand. I did like how he rescued Leona, but other than that I felt it was missing something. Don't get me wrong, I do Delilah's work, but this story just was all right. I will still go back and read her work, because not ever story is going to work for everyone.